Orichalcum ore map locations in Assassin’s Creed Odyssey are hidden behind a paywall. To see Orichalcum ore on the map you would have to go into the in-game store time savers and buy it for 300 helix credits. You can find all ore in the game without the purchased map, but there are hundreds of locations and it would be really hard to scour the whole world of Odyssey looking for them. That is why we decided to bring you this Assassin’s Creed Odyssey Orichalcum Ore Map Locations guide. It contains screenshots of the in-game map with all Orichalcum locations. It is used as currency to buy epic and legendary gear from Oikos of the Olympians. He is a special vendor that weekly changes the items he sells and only accepts Orichalcum. 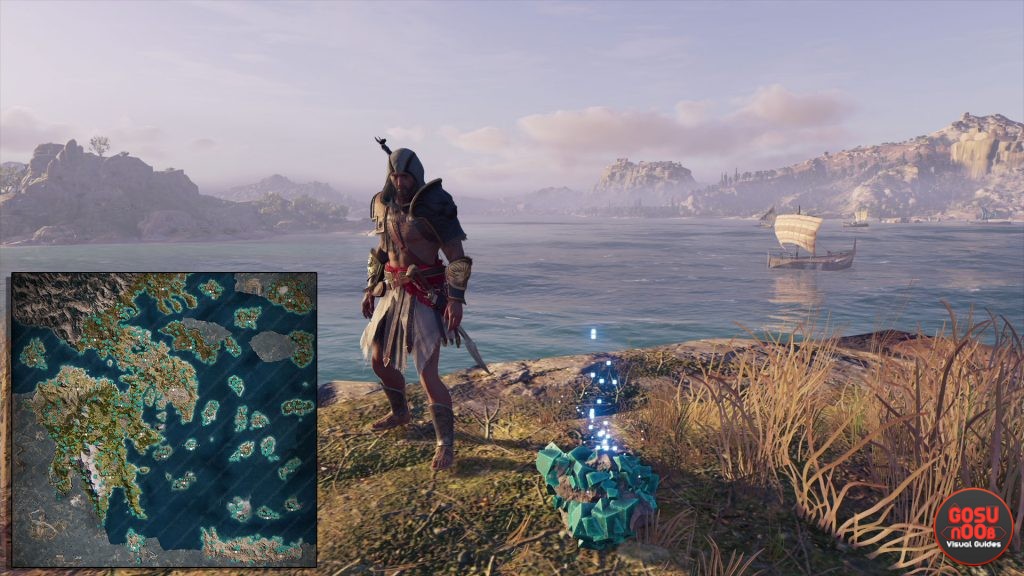 We’ve decided to take a screenshot of the map of every region in the game and show orichalcum ore locations this way. Since there are dozens of regions and hundreds of locations anything else would be incomprehensible. I suggest you go hunting for Orichalcum region by region and use our maps for it. I’ll try and organize the maps in the way you would progress through the main story of the game. If you click on the map image it will take you to a page where you can see the largest size of that image that we have. First up are Kephalonia, the starting island of the game, and Megaris, small region you visit next.

Phokis is the first larger region that has lots of ore to find. It is also home to the special merchant that accepts orichalcum ore in exchange for legendary and epic items. He will sell one legendary item and three epics each week. He even sells items that can only be obtained by purchase for helix credits in the Ubisoft store. That is why orichalcum is such a valuable resource. IF you are ever looking for a legendary item with that special engraving this is where you’ll find it. Attika is the home of Athens, so this is next where you’ll go in your travels and is another map we’ll show here.

Next up are three large maps in northern Greece. Most of them are your level by now, but Boeotia is a bit higher. Orichalcum ore is obtained not only through finding resource nodes in the open world. You can also do daily bounties from message boards on your ship or in cities. Every day a new quest will be activated that is easy to do and rewards 10 orichalcum. This is actually the main source of the ore in the game. Getting these in the world is just something you want to do if you are missing a few to get that legendary in a particular week.

I’ll cover the northern part of the main land mass in Greece here. Argolis and Korionthis are what you’ll be exploring after Athens if you are looking for level appropriate content. Other two regions are much higher in level, but geographically make sense. Also, you’ll be close to Oikos, who is just across the sea in Phokis. He sell these Olympian Gifts that are only 20 orichalcum. They work like Hekka chests in Origins. They give a random epic or legendary with a fairly low chance of getting a legendary. If you have so much orichalcum you don’t know what to do with it this might be a good way to spend it. I would recommend this after you picked up everything else you can in the game so you get new, undiscovered items.

You will visit Sparta as part of the main story eventually. Alkexios’s and Kassandra’s home land and main city are there for you to explore. You will find lots of orichalcum as well since all of southern Greece is a large land mass. Orichalcum fragments are usually located in hard to reach or seldom visited places. Main or side missions do not take you to the parts of the map where orichalcum spawns. If you see a small portion of land protruding into the sea and is out of the way of all major roads that is where you’ll find the ore. This is what makes hunting for these so interesting, yet difficult. Ultimately, orichalcum ore is the reason you will see all of Greece in Assassin’s Creed Odyssey.

Click on any of the map images to find a full sized image. Some of the screenshots get cut off in the article due to their size, so to see full resolution images click on them and you can zoom in on the image on its special page.