Unkindest Cut is one of the side quests in Assassin’s Creed Odyssey. It starts automatically after you’ve completed two other quests – Helping a Healer and Sins of The Past. It will task you with saving Praxithea the Oracle, then deciding whether to kill or spare her. The quest can end with a romance scene, but only if you choose the right options. This guide will show you how to complete AC Odyssey Unkindest Cut side quest, whether to spare or kill Praxithea and how to romance Lykaon.

When you meet Lykaon, you’ll start the Helping a Healer quest. He’ll first send you to get him some mandrake herbs from a nearby stream. After that, he’ll send you off to deliver the medicine he prepares to several villagers. Finally, he’ll ask you to accompany him to his grandmother’s house, so he can deliver her medicine too.

When you get there, you’ll meet an angry villager and begin the Sins of The Past quest. You’ll have to investigate Praxithea’s house to try to figure out who took her and where. When you’ve got all the clues, you’ll finally start the Unkindest Cut quest, in which you’ll have to save her from the farmhouse.

Kill or spare Praxithea the oracle?

You’ll find Praxithea in a cage in front of the house – open the gate and help her escape. Once you’re safe, you’ll confront her about her false prophecies. Lykaon will show up during your conversation, too. Once she’s done pleading her case, you’ll get three options – to let Lykaon kill her, to end her life yourself, or to let her go.

All of these options will give you the same material rewards – a legendary helmet in our case, and a handful of drachmae. However, only one of these options leads to the romance scene with Lykaon, and it isn’t marked with a heart icon, like they usually are.

How to romance Lykaon the healer?

In order to sleep with Lykaon, you’ll have to choose the option to spare Praxithea – it’s the one that says that violence won’t solve anything. The false oracle will go about her way, thanking you for sparing her life, and you’ll witness a moment of intimacy between yourself and the village doctor. 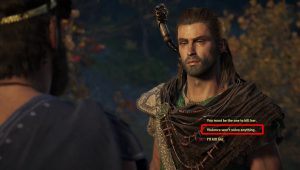 If you choose to let him kill her, he’ll be too tormented by his actions to think about romance. Likewise, if you kill her yourself, he’ll be disappointed that you didn’t let him do it, since he feels it was his burden to bear.