Are you receiving the Connection Failed Puget-Altus error in the Modern Warfare 2 Beta? The MW2 beta early access has just kicked off for PlayStation gamers who have pre-ordered the game. And while many are already enjoying the game, many others are still unable to do so. This is mainly due to various errors, despite them pre-ordering the game via the PS Store. Here’s what we know about the Puget-Altus error, which comes with the “unable to access online services” message. 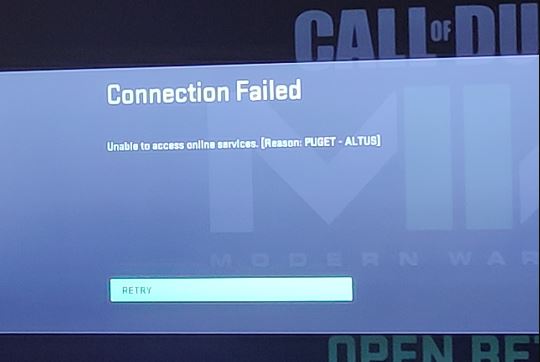 If you were hoping to start playing the MW2 beta immediately upon the start of early access, you might be disappointed when you see that you’re unable to do so due to the Puget-Altus error. This error causes Modern Warfare 2 beta to fail to connect, as it is “unable to access online services”. Firstly, you should know that you are not the only one with this problem currently. There are numerous reports of players getting stuck with the same issue. Secondly, this most likely has nothing to do with you.

So, is there a way to fix the “Connection Failed Puget-Altus” error in the Modern Warfare 2 beta? While there is no 100% proven workable solution, there are a couple of steps you might try. Players who have encountered similar problem claim that some of these steps have helped solve the issue:

One of these methods should hopefully help with your issue in regard to the “Connection Failed Puget-Altus” error in the MW2 beta. If the problem persists even after all these steps, try contacting Activision support and explain your problem. If we find any other solutions, we will make sure to update our guide.