Are you getting a “Connection Timed Out” message when trying to install the pre-release update for Call of Duty Modern Warfare 2? Campaign early access is now officially live for those players who have preordered Call of Duty Modern Warfare 2 digitally. Starting from October 20th, at 7 pm CEST / 6 pm BST / 1 pm ET / 10 am PT, everyone with a pre-order will have a chance to start playing the campaign. However, some players are having trouble starting the game. If you receive messages like “You are missing one or more Single Player DLC Pack” or “Connection Timed Out”, read on. We explain why you can’t install a pre-release update and start Modern Warfare 2 Campaign Early Access. 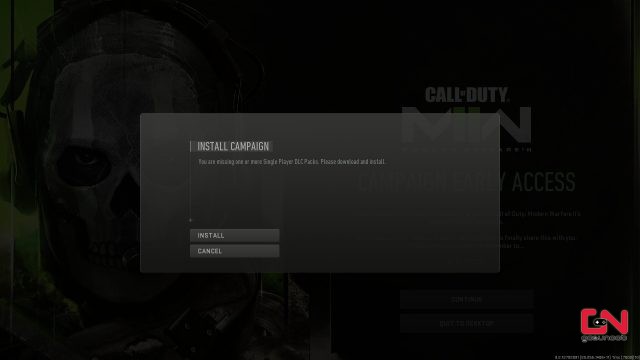 At the time of writing a number of players across Reddit, forums and social media are reporting about various issues. Namely, it seems that players on various platforms, including Steam, Xbox, and Battle.net, can not start the game. When you start Modern Warfare 2 the game asks you to install the pre-release update. It says that you are “missing one of more Single Player DLC Pack”. It then asks you to download and install them, but the option is simply not there. Then, for Steam users, you eventually receive the “Connection Timed Out” message. Why is this happening and can it be fixed?

The good news is that the issue is not on your side. Namely, this is happening simply because too many players are simultaneously trying to download these additional files and servers simply can not handle that many requests. That’s why you currently can not start and update Modern Warfare 2 Campaign Early Access on Xbox, Steam, and Battle.net. You will simply have to wait a little bit until the pressure on the servers eases up. Then, you will most likely be able to download the update and start the campaign. For now, that’s all we know. We will, however, follow the situation closely and add new information as it surfaces.