Quakestone Hammer is a new weapon in Dark Souls 3. It was added with the Ashes of Ariandel DLC.
▼Article Continues Below▼
It’s a giant hammer that can do considerable damage, and you’ll be able to get it once you travel to the Painted World of Ariandel. It has a weapon art that can make the ground tremble and create shockwaves. In this guide, we’re going to show you where to find Quakestone Hammer in Ashes of Ariandel, what it looks like and its stats.

Spawn at the Snowy Mountain Pass bonfire. Go up the mountain, under the felled tree, past the giant bell. Turn left as you pass the bell and go all the way to the cliff edge. Once there, turn right and head back into the mountain, where the wolf pack is. You can kite the wolves and trick them into falling off the cliff pretty easily. Climb along the path on the left, then turn left, then immediately right. You’ll find yourself in a dead end, with a giant Millwood Knight in it. He’ll shoot giant, explosive arrows at you, but if you rush him, he’ll pull out a giant hammer of his own and flatten you. You’ll find your prize on the corpse next to him.

Description:
A stone hammer wielded by Millwood Knights, with a head of naturally-formed stone. The knights of Millwood would fight hand-in-hand with the earth itself, and this weapon, among the oldest in all Millwood, is symbolic of that relationship.
Skill: Quake
Burrow hammer head into the ground with a great slam, and use strong attack to upheave earth, creating a shockwave that rumbles like a mighty warcry.

It’s a giant hammer that requires a minimum of 40 strength to wield. It has a C in strength scaling without upgrades. It’s like a steamroller. 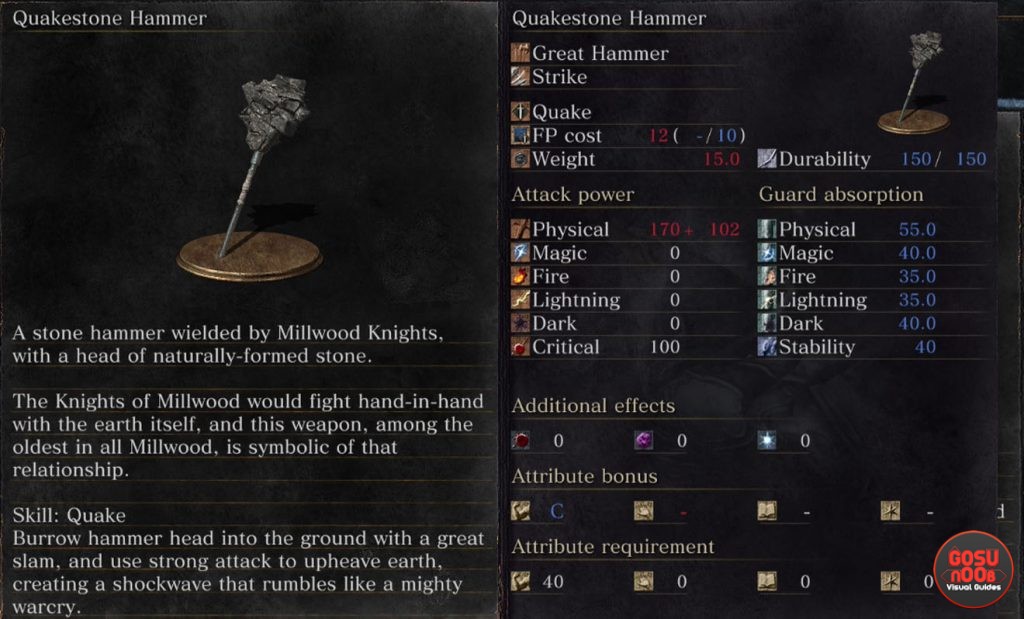