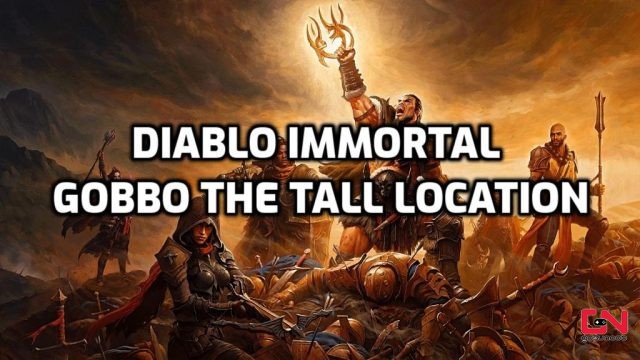 Where is Gobbo the Tall in Diablo Immortal?

Gobbo the Tall is one of the so-called Purple Rare Elite monsters. This special kind of mob essentially acts as an invisible blue quest and zone event, which occurs randomly. This means that there is no way to trigger Gobbo the Tall to appear on your own, it spawns at random. The good news is that when he spawns, he always spawns at the same location. We’ve marked his exact spawning location on our map below.

However, some players report that there are methods for players to make him respawn. According to reports, the first thing you need to do is to clear all the mobs around his spawning location. Mobs there will spawn out from a huge hut near the spot. Another thing you also need to do in order to make him appear is to collect all chests and other types of fixed loot around him. This includes bone piles, cursed, dead acolytes, glorious, resplendent, etc. On the map above, we’ve also marked the locations of these chests around Gobbo’s location in Bilefen. Once you collect all the chests and clear the area of mobs, there is a chance he will again spawn. However, we need to repeat this again, this method is not confirmed, so take it with a grain of salt. There is a chance that it will not work and that he simply spawns completely randomly.

NEXT POSTOverwatch 2 Reveal Event Date, Time & How to Watch