Wondering how does multiplayer work in Diablo Immortal? The next instalment in the cult classic action RPG series will be the first one released for mobile devices alongside PC. Set between the events of Diablo 2 and 3, Diablo Immortal fills the gaps in the story and explains what happened in the time period of 20 years between the two games. Being able to play with friends or against other people is one one the core parts of Diablo games. In this guide, we explain how to play Diablo Immortal multiplayer, how does co-op PvE and PvP work, and more. 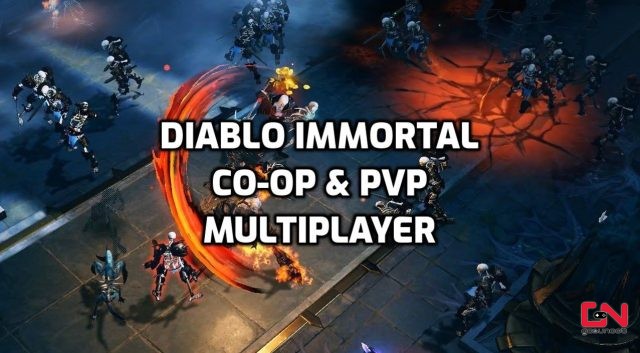 How to play multiplayer in Diablo Immortal

If you want to play a co-op campaign you can simply create a new game and either leave it open for anyone to join or invite your friends. However, the best way to find people for multiplayer activities is by joining a Clan. Clans are a social feature of Diablo Immortal. Each Clan can have up to 100 members and are the best way to organize your PvE and PvP activities.

If you want to clean PvE co-op dungeons or organize a PvP team, you can join a Warband. Warbands are like smaller clans, and they are best for people who only want to play with friends while also having the benefits of social activities in the game. Warbands will still grant you multiplayer bonuses, such as more rewards, extra chests, leaderboard points, and so on.

Finally, if you are not a member of a Clan or Warband, you can still play with other people. Even if you have no friends! You can use the Party Finder feature which will send a message to various chats, letting people know you need players. Or, you can simply wait near a dungeon you want to clear and see if there are other people outside who need teammates.

NEXT POSTHow to Use Candy XL Pokemon GO