There are six classes of weapons in The Division. Each of them has unique qualities that make it more or less useful in certain situations. It can make the beginning of the game a bit overwhelming. Which class you decide to use will depend on your preferences and your needs. This guide will help you choose a type of weapon and show you the best starting weapons in The Division. 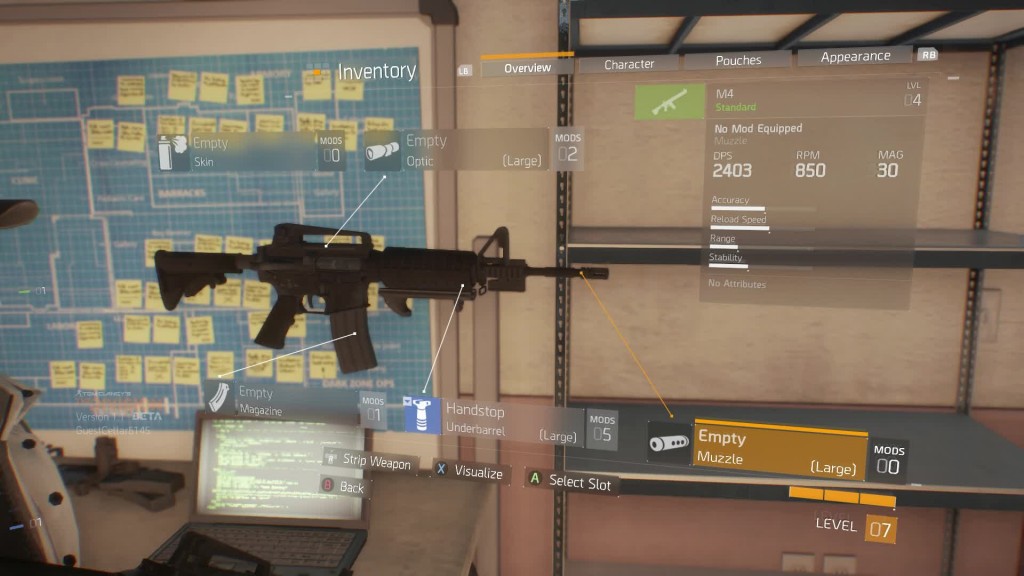 Choosing the perfect kind of weapon will take some time and work. You’ll have to try out a bunch of different stuff, get a feel for the guns and decide what suits you. You shouldn’t be looking solely at the DPS stat. Other things will influence your choice as well, like the size of the magazine, the range, accuracy and stability of a rifle, or the rate of fire.

Assault weapons are the most versatile class in the game. All of their stats hang around the middle of the spectrum. They do decent damage with a somewhat high rate of fire and a pretty large magazine. They can be reloaded pretty quickly, and their accuracy is nothing to complain about. Assault rifle work best at medium range, but they won’t let you down in close encounters either. Most of them are highly customizable, thanks to the large number of mod slots.

Submachine guns have an increase chance of landing a critical hit. Their rate of fire can be extremely high and they are somewhat inaccurate. They’re great for short range combat – each bullet has a chance to stagger the opponent, so spraying large amounts of bullets increases your chance of keeping a single enemy out of commission. They can be improved using mods, and it’s always a good idea to install at least one to help with the recoil.

One of the earliest SMGs you’ll find is the MP5. It’s pretty basic, but it will show you how this class works and whether it’s a good fit for you. It even has a burst fire mode, which helps with the accuracy at longer ranges.

Light machine guns are great for supportive fire. They have a high rate of fire, sometimes combined with big magazines. They aren’t terribly accurate, but are great for spraying the enemy team with bullets from a distance and stopping them from leaving cover. An agent using one of these can control the movement of the enemy team and allow his teammates to flank them.

The Military L86 LSW is an early game model, perfect for new players trying to find their place in the world. It has 5 mod slots, which allows you to tweak it as you wish, and is generally the most well-rounded LMG in the game.

Shotguns are meant for more experienced players. They’re limited to only a few bullets in the magazine, which means you have to make every shot count. They’re slow to reload and slow to fire. Using a shotgun means getting close to the enemies, which is always risky business. Since damage is calculated per pellet, you have to get as close as possible and make sure every pellet connects with the target. Two well-placed shotgun shells are enough to make anyone panic, let alone more.

You’ll get a chance to use the Super 90 early on in the game, which is a decent starting point. Cassidy is a high-end, rare double barrel shotgun with insane damage. You’ll find it at a vendor in DZ02 early on.

Marksman rifles are basically sniper rifles. They do increased headshot damage compared to other guns. They work best at long ranges. The slow rate of fire and reload speed make it necessary to hit as much as possible. Missing a shot will expose your position, alert the enemies to your presence and make it harder to hit subsequent shots. Being precise is the key when using weapons from this class.

The SCAR-H is a strong and versatile weapon, that can even help you get out of a tight spot at shorter ranges. The Classic M44 Carbine, on the other hand, is a classic sniper rifle, with bolt action reloading, where you have to make every single bullet count.

Pistols are sidearms – they’re not intended to be used as a primary weapon, but you shouldn’t disregard them. When you’re all out of ammo in your main gun, pulling a pistol out instead of reloading can mean the difference between life and death. They’re terrible at longer ranges and hold little ammo in the magazine. Almost all of them have a talent that allows them to do double damage when you’re under 30% health.

The 586 Magnum is a great choice for the starting areas. It only has 6 bullets in the barrel, but each of them does quite a bit more damage than other pistols.