Aluminum is one of the crafting materials in Fallout 76. It’s one of the most widely used resources, and you’ll need it for a whole bunch of projects, including both base buildings and gear. You only discover it’s actually kind of scarce when you start looking for it. There are a lot of items that contain it, but there’s usually not a whole lot of those items just sitting around. In this guide, we’re going to show you where to find aluminum in Fallout 76.

How to get aluminum in FO76?

1. Although you can find the ore in the mountains, maybe even happen upon a node you can harvest in one of the workshops, the best way to collect aluminum is scrapping items that contain it. There’s a bunch of stuff with at least some aluminum in it, and it adds up over time. For example: alarm clocks, cans, hub caps, wind chimes, toy rocketships, sensors, tray. Protectrons can sometimes drop it as well. The usual rules apply – collect everything that isn’t nailed down and scrap all your junk.

2. Wind chimes are a great way to get aluminum, and they’re relatively low effort – just follow the sound whenever you hear it. Most houses have them, and they’ll give you two to three units of the resource.

3. If you’re in a hurry, though, there are a couple of places where you can get aluminum fast. Every time you find a cafeteria, you’ll also find a bunch of trays. This means you should be on a lookout for schools and hospitals – the latter especially, as they also have surgical trays which are – surprise, surprise – made of aluminum. For instance, you should try Morgantown High School, or the AVT building in Charleston. 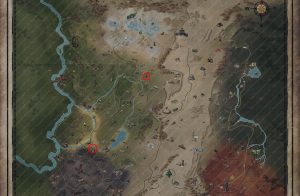 4. If you want to mine and not scavenge it, we’d suggest visiting the Tyler County Dirt Track workshop. Make an extractor, power it up, and it’ll give you a constant trickle of aluminium (around thirty pieces an hour). Make sure you beef up the defenses, though, as other players or random AI enemies might want to tear it down.

5. Go to Charleston Fire Department and farm the protectrons standing around. They usually drop aluminium (thanks xKancaix)

PREVIOUS POSTFallout 76 Ceramic Locations – How to Get

NEXT POSTFallout 76 Where to Find Deluxe Edition & Preorder Bonus Items