To everyone’s big surprise, a part of the upcoming Danny Trejo DLC for Far Cry 6 has accidentally made it into the game. While the full release is scheduled for next month, players that logged into the game after the latest update were surprised to learn that they could play through a portion of this new DLC questline. It all begins when you get a call from Juan Cortez, informing you that you should meet with his friend – who is none other than Danny Trejo. During the course of this quest, you will also get the chance to ride around on Danny Trejo’s bike. If you would like to take a ride on this custom, flame-painted hog, our Danny Trejo Bike Far Cry 6 – How to Get Danny Trejo Motorcycle guide will tell you all about this magnificent vehicle. 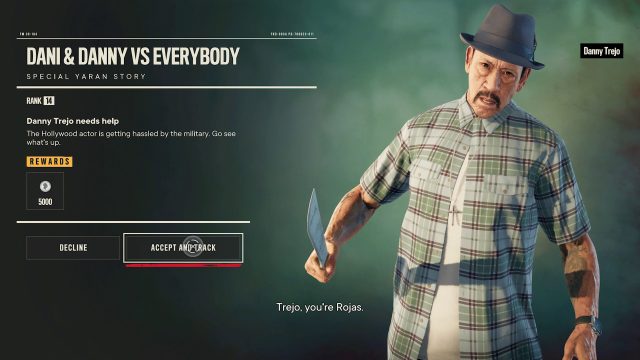 How to Get Danny Trejo Bike Far Cry 6

When you load up the game, Juan Cortez will call you to let you know that his friend Danny Trejo is in trouble. Naturally, this means that you will need to help him. This begins the “Dani & Danny Vs Everybody” quest. He is at the east end of Valle De Oro. We have marked his exact position on a screenshot below. When you get there, Danny Trejo will require your assistance with getting some cooking ingredients for him. These are the taco meat, fresh pineapples, and the homemade salsa. All of them are nearby and shouldn’t be too difficult to get. After you get all of these back to him, the army will attack.

After you hold off their attack, Danny will reward you with the keys to his bike. You are supposed to use it to deliver the tacos he cooked, but this is where this partially-released mission ends. While you can ride the Danny Trejo motorcycle around, you can’t save it at a vehicle pick-up point. Presumably, when the full DLC is released, you will be able to do this, but for now, this is the only way you can get the Danny Trejo bike in Far Cry 6. Of course, there’s always the chance that Ubisoft will patch out this mistake, so it is our recommendation that you get to his quest ASAP if you want to try out the bike for yourselves.