Cooking is one of the most useful skills in Final Fantasy XV. Ignis is the master chef for the party and here are some great cooking tips and tricks in FFXV. These can be the best and quickest ways to learn new recipes for Ignis’s cookbook. 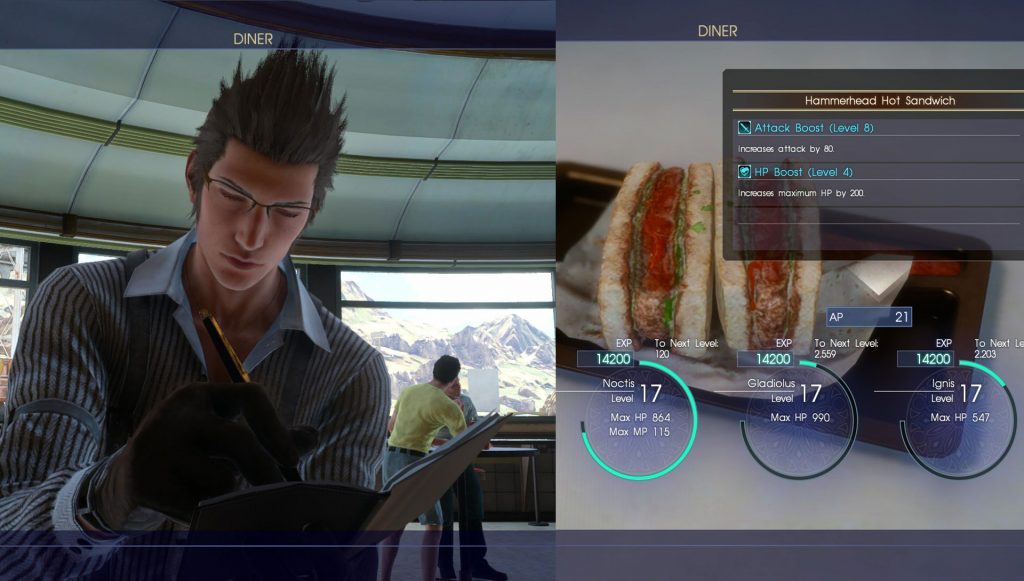 The first thing you should know is how important it is to gather as many recipes as you can get your hands on to. In this guide, we will show you some of the best ways to obtain new resources for the recipes so Ignis will have more options when preparing the party for upcoming battles. Be prepared for a lot of exploration and some gil investments.

First of all, we can say that the most obvious way is to find the ingredients on the spots that are indicated on the map. You will recognize them as they will pop up in the form of a yellow leaf. Fishing posts and killing monsters around the world will also give you the possibility to receive an ingredient. Take on the hunts, because some creatures will drop an ingredient for a new recipe and you will get some extra cash to spend and eat in a diner. Also, don’t ignore the fishing quests, as the recipes gained from catching different fish also give great boosts in combat.

There are some vendors in the outposts that sell cookbooks, so make sure to buy those, as they will help you learn new recipes.

Also, while you are in an outpost, try the food from the diners, as it will give you considerable boosts, but also give Ignis a chance to see the new dish, and learn the recipe for it. So eat at the diners as often as you can afford to. Note that tipsters in the diners can offer you hunts, so do those, as they will get you some extra cash to spend.

When you are walking around a town, pay close attention to see if anybody is eating anything. Literally just by walking past them, Ignis can have a moment of sudden realization and learn a new recipe.

As you go through the world, you will come across food magazines and food posters. Be sure to check them out, because they can also be a way of finding a new recipe for a dish. They can be located anywhere, so look for them in buildings (ruined or not), because they can have hidden posters on their walls.

Additionally, we must note that some of the ingredients for the new recipes are available only from monsters in the dungeons. So prepare yourself for some dungeon raiding in the search for that perfect meal, as the mobs and even bosses in there will give you rare and good drops.

Last, but not least, level up Ignis’s cooking skill, as he will learn a new recipe every time he gains an additional level. So try to boost that skill as fast as possible.

So, in short, here is what you would need to do if you want to find all of the recipes in the game.

Food is a large component of this game, and you will have more options when dealing with some tough enemies. If you want to know what the recipes will unlock and which buffs they apply on the party see our Final Fantasy XV cooking recipe locations guide.