I might be a Ubisoft skeptic, but I have to admit, For Honor seems like a metal album cover come to life. And it’s awesome. Ubisoft’s upcoming online hack-and-slasher answers one of the most important questions from the playground: Who would win in a fight between knights, samurai and Vikings.

The trailers coming out for this game confirm this. They really seem to embrace the silliness of the concept in a deadpan sort of way. If this is how the game’s atmosphere is going to be, I’m sold. Ubi, please deliver on this one. The concept is way too metal to botch. Let’s take a look at the For Honor story trailer, as well as the Warlord, Shugoki, Peacekeeper trailers. 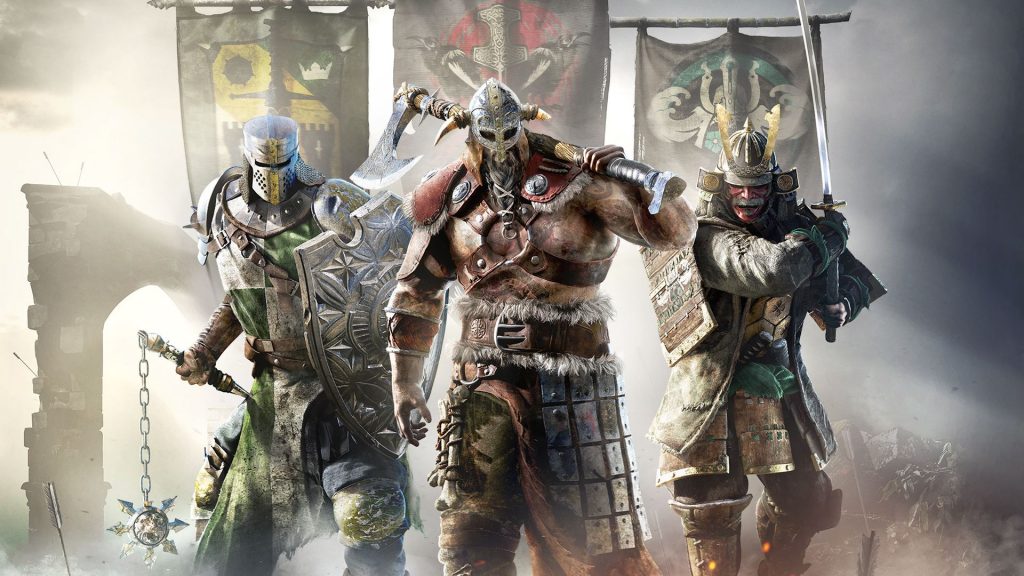 This trailer sets up the Universe of the game. From what I can gather, there is a secret group of warmongers, led by Apollyon, that believe the world is too peaceful. They maintain that the most noble warriors of the world are suffering because of world peace; that the weak must be weeded out.

To this end, they start wars between the Vikings, knights and samurai to usher a new “age of wolves” in which only the strong can survive. Can you hear the shredding guitar solos just from reading that sentence? Okay I’ll shut up about the heavy metal now.

Peacekeeper, Warlord and Shugoki are the new classes in the game, each from a different faction. Let’s go over them one by one.

Peacekeeper seems to be my kind of character. He’s quick and stealthy; the kind that has the highest probability to make your opponent chuck the controller out the window. Peacekeepers are a mysterious order of assassins, it seems, but we’re not sure what their exact place in the Universe is. My guess is that they’re trying to protect people caught in the whirlwind of this medieval world war.

The Shugoki is the brute. The trailer even hints that they might be demons, or at least possess the strength of demons. They fight with what looks like an enormous meat tenderizer. Judging by the trailer and the effect the weapon has on enemies, that’s exactly what it is. However, the trailer also hints that the Shugoki are protectors, so that sounds like an interesting character.

Finally, there’s the Warlord. Their role isn’t immediately obvious to me, but the trailer says that they are also protectors of a sort. They also, however, lead their people to battle, as true warlords do. I guess this might mean that they are the balanced class. Either way, they are fearsome warriors not to be trifled with.

What’s your opinion on this game? How metal do you think it is? Tell us in the comments!

PREVIOUS POSTPokemon GO How to Get Raichu With Christmas Hat