Gold XP coins are collectibles in Fortnite Battle Royale. As the name suggests, they’ll give you an XP boost when you find them. There are three gold coins hidden on the map in week 6 of season 3, just waiting to be plundered. If you’re having trouble finding them – and you probably will – this guide will show you Fortnite gold XP coins locations in week 6 season 3.

Where to find gold XP coins in Week 6 Season 3?

Update: There are several youtube videos and reddit posts where players reported Gold XP Coins bug. Some players don’t see the coins, while some of them can see them but can’t collect them.

At this point, we only have the leaked locations that we obtained thanks to the diligent effort of data miners. So far we haven’t been able to confirm them, but that might be because we haven’t finished the challenges yet. We’ll update this guide with precise locations when we do find them. For now, you can check these places out. 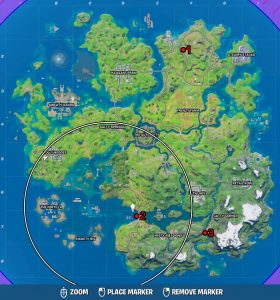 The first one is on the road north of Frenzy Farm, near the coast. It’s the road on the hill, above Craggy Cliffs. The coin should be hovering above the middle of the road.

The second one is by the dam northwest of Misty Meadows. According to the leak, it should be on the seaward side of the dam, hovering in mid air, which means you’ll have to grab some materials to build a ramp before you can get it.

The third gold XP coin is near the yellow bridge east of Misty Meadows. It can be found suspended in the air below the bridge – again, make sure you have enough materials to build your way to it.

How much XP do you get from gold coins?

Gold coins are the most valuable of all the XP coins in Fortnite. Each one you pick up will give you 15.000 XP. Collecting all of them is a great way to boost your rank, so make sure you take the time to look for them.