Popular streaming star, Ludwig, has just announced his latest project – Ludwig Mondays featuring Fortnite. The YouTuber has struck a deal with Epic Games, the creators of Fornite, which includes sponsorship for his series of tournaments. This partnership will allow Ludwig to significantly raise the quality of production as well as to put more money into the prize pool. If you are interested in watching this event, read on. Here’s everything you need to know about Ludwig Mondays Fortnite tournaments, including invited streamers, rules, dates, and more. 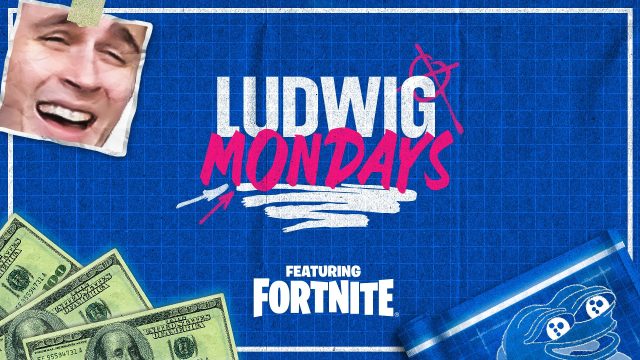 As the name of the series suggests, the tournaments will be held on Mondays. The first one in partnership with Epic is set to kick off next Monday, April 18th 2022. The exact starting time is yet to be revealed, but we will update the article as soon as we have more information. The series will run until May 2nd when the last event will be held.

Each of the tournaments in the series will have a somewhat unique set of rules. Ludwig has previously already held a couple of Fortnite tournaments. Those events featured some of the biggest streaming stars, such as Lazarbeam, xQc, and others. This time around, the event will be focused on smaller streamers. The idea is to give up-and-coming streamers a chance to earn money and kick start their careers. This means that no pro players will be invited. Also, only those streamers who average less than 1,000 viewers will have a chance to get invited. We will add a list of invited players once Luwdiwg announces them.

The partnership with Epic Games has secured Ludwig enough money to introduce a hefty prize pool for each tournament in the series. The three tournaments will each have $100,000 up for grabs. This means that the whole series features a whopping $300,000 prize pool.

The previously most-subscribed Twitch streamer moved exclusively to YouTube last year in one of the biggest streaming deals in history. This means that you will only be able to watch the tournaments via his YouTube channel. However, the participating streamers will most likely be allowed to stream their POV as well. Thus, alternatively, you can watch the event on their private channels. With that said, that is all you need to know about Ludwig Mondays Fortnite tournaments.