UPDATE: The challenge is now live. The first one can be found in the house in the southwest of the map, at the base of the viking village mountain. It’s in the one with the external basement entrance.

If you head up to Snobby Shores, you can find another one there. It is in the southernmost house. Go into the bedroom and break the wardrobe. Follow the stairs, and you’ll end up in another bedroom, in the basement. The puzzle piece will be next to the lamp.

There’s also one in Shifty Shafts. Land near the two houses west of the mines. The piece is in the southern one. Go inside and head into the basement. You’ll find it next to the equipment case on the left, by the edge of the green area.

Head on down to Greasy Grove, and you’ll find one in the basement of the burger joint. Go down the stairs and head into the the room where the chest spawns. You’ll find it at the end of the corridor, on your left.

If you head east from Risky Reels, you’ll find two houses halfway between there and Wailing Woods. The eastern house has an external basement entrance. Go in and use the door on the right. You’ll see the piece in the corner.

While you’re in the area, go west, towards the river. You’ll find two houses on the river bank – the northern one has a basement. Break down the door and descend the stairs. The puzzle piece will be next to the shelf on the left.

The seventh piece is also in the area. There’s yet another copy of those exact two houses south of Risky Reels, on the way to Tomato Temple. The northern house is the one with the basement. You’ll find the jigsaw piece in the big room, in the corner.

ORIGINAL TEXT: Despite the wording, there probably won’t be any loot involved. Expect just to interact with simple objects on the map, like you did with the various gnomes and cakes. They’re probably going to be fairly visible, but they might be stuffed behind other objects, like shelves, barrels, bathtubs and such.

We don’t know the precise locations yet, since they haven’t been added to the game at this point. There’s going to be an update tomorrow, and it will surely add the puzzle pieces, among other things. We’ll update this page then, with screenshots and detailed descriptions of each one. Until then, we can speculate.

You can already dismiss a bunch of locations, since not every place has a building with a basement. Places like Junk Junction or Risky Reels most definitely won’t be featured. Some places are neither here nor there – for instance, the church in Haunted Hills does have a lower level, but it’s not below ground, so it’s debatable whether it counts as a basement. Or Shifty Shafts – do the mines count as basements? They are underground, after all. What about the cave beneath the house in the middle of Loot Lake?

However, there most definitely are basements at Pleasant Park, Snobby Shores, Greasy Grove, Salty Springs, Retail Row, the mansion south of Lonely Lodge. Some of these places have only one basement, some have more than a few. They’re all definitely going to be featured in the challenge, so explore them a bit if you’re not sure you know them by heart.

Here’s a map of all the places where you can find basements: 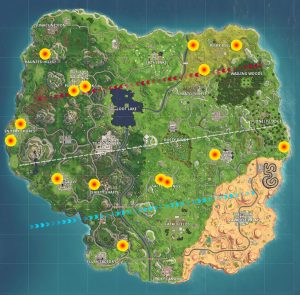