The Moonlight Seeker event in Genshin Impact is underway, and you will need a lot of effort if you want to reach 100% collection progress in it. But doing this is definitely worth it, since you can get a whole bunch of Mora and other rewards, not to mention the Luxurious Sea-Lord, a powerful 4-star Claymore. In order to begin this, you will first need to complete the “One for the Foodies, Two for the Show” and “The Many Matters of the Moonchase Festival” quests. After that, speak with Linyang in Liyue Harbor. Currently, only the first path, called the Path of Stalwart Stone, is available, which will take you to Minlin. Our Reach 100% Collection Progress Moonlight Seeker Genshin Impact guide will show you how to find all of the Moonchase Charms and Mystmoon Chests here. 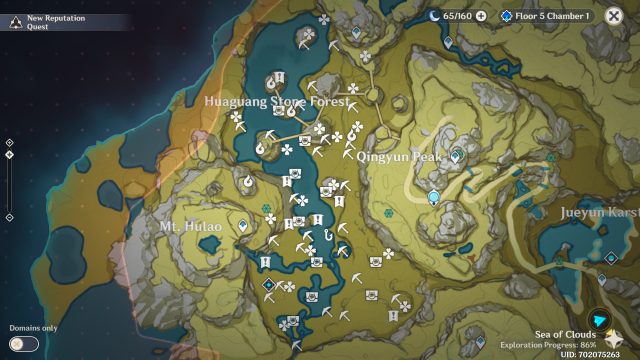 There are a total of 30 Moonchase Charms and 40 Mystmoon Chests in Minlin, Liyue. Linyang will give you hints where they can be found. In the screenshot gallery below, we have marked the locations on both Charms and Chests in two separate screenshots. This area can be found in a canyon between Mt. Hulao and Qingyun Peak. All of the Charms and Chests for this path are located there. Be careful around Mystmoon Chests. When you approach them, some of these Chests will spawn in enemies, and will remain locked until you have defeated them. Once you have done so, you will then be able to open and loot them. Besides the usual assortment of rewards found inside, each chest will always contain Primogems as well.

Some of the Moonchase Charms and Mystmoon Chests are in plain sight, while others are a bit more hidden. Charms, especially, can be high in the air. When you get to one of the places we’ve marked in the screenshots, take a good look around until you have found them.

NEXT POSTHow to Get to Arcane Sanctuary Diablo 2 Resurrected