Looking for all three Genshin Impact 3.3 Livestream Codes? You’ve come to the right place! The Genshin Impact 3.3 special program is here, and we’ve learned a lot about the update. It will bring us two new characters, Anemo 5-Star Scaramouche and Anemo 4-Star Faruzan, Genius Invokation TCG, Tullaytullah’s Remembrance and Redhorn Stonethresher claymore weapons, and more! And to make sure that you’re ready for the update, claim these Genshin 3.3 Promo Codes to get free Primogems, Enhancement Ores, Hero’s Wit, and Mora! 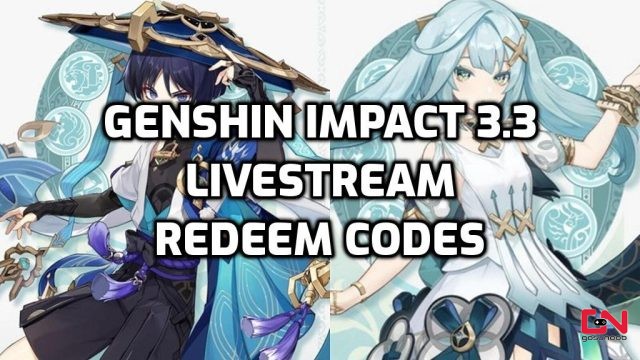 Version 3.3 Special Program has now ended. Below, you will find all three Genshin 3.3 Livestream promo codes and rewards. Make sure to redeem them as soon as possible as they will expire in 24 hours and become invalid.

How to Redeem Genshin Livestream Codes

It has been more than two years since the release of Genshin Impact. By now. you are probably well familiar with the code redemption process in Genshin. However, just in case you are not sure what you need to do, we’ve got you covered! Below, you will find a step-by-step guide on how to claim Genshin codes.

And that’s it! If you want to claim another code, simply repeat the process. Your rewards should appear in-game in your inbox. It should be noted that each code can be claimed only once per account. You can not redeem the same code twice on the same account. Furthermore, these codes will expire rather quickly, so make sure to redeem them before they become invalid. If they show an error, that’s most likely due to them being no longer active. With that said, that’s all you need to know about Genshin Impact 3.3 Promo Codes.