Yae Miko is the newest playable character to be added to Genshin Impact. A 5-star character, she is an Electro-vision user and wields a Catalyst weapon in battle. You will no doubt have a great time playing with her, since she has a lot of very useful abilities, including a passive talent that lets her create an extra Talent Material during Character Talent Material crafting. Of course, like other playable characters she, too, has a signature dish. Called the Fukuuchi Udon, it is a special version of regular Udon Noodles. If you are wondering where you can get the recipe for this dish and how to cook it, our Yae Miko Special Dish Genshin Impact guide is here to help you with that information. 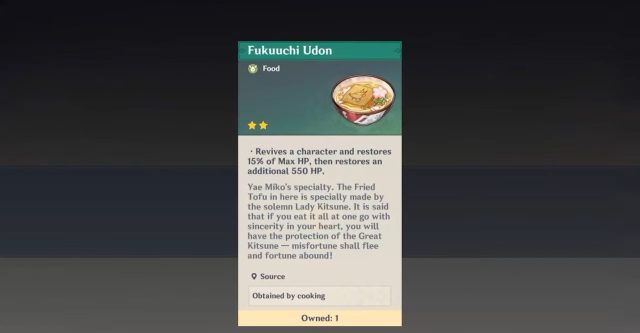 To be able to cook Yae Miko’s signature dish, you will first need to purchase a recipe for Udon Noodles (if you haven’t already). To do this, head to Inazuma City. You are looking for Shimura’s – a food joint run by Shimura Kanbei. Go there and speak with him. Tell him you’d like to see the menu. Here, you can buy the recipe for Udon Noodles for 2250 Mora. Right next to Shimura’s shop, there is a cooking pot. Approach it and start cooking. First, learn the Udon Noodles recipe. This recipe requires the following ingredients: x3 Flour, x1 Seagrass, and x1 Fish. Obtain these if you don’t have them.

Once you have everything you need, select Yae Miko as your playable character and start cooking Udon Noodles. There is a chance that, when cooking Udon Noodles with her, you will receive her special dish instead – the Fukuuchi Udon. It looks very appetizing and it functions as an improved version of the Udon Noodles, restoring more health to anyone that consumes this dish.