Not sure where to find Dragon Claws in God of War Ragnarok in order to craft the Dragon Scaled armour set and get the Dragon Slayer trophy? We’ve got you covered! God of War Ragnarok boasts numerous gorgeous pieces of armour you will be able to obtain during your adventures. Of course, they are not only good-looking but are also important gear which boosts your various stats. And for many of them, in order to craft them, you’ll need some unique resources. In this guide, we explain how to get Dragon Claws in GoW Ragnarok and list some of their locations. 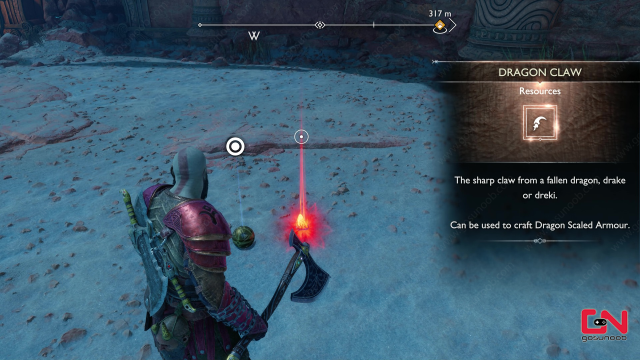 How to get Dragon Claws for the Dragon Scaled Armor in GoW Ragnarok?

Where to Find Dragon Claw in God of War Ragnarok

If you’ve played 2018’s God of War, you’ll feel right at home with Ragnarok. The game is essentially one huge stand-alone expansion rather than a completely new system, and thus, there are many mechanics you already know from the previous game. And crafting great armour sets is definitely an important part of that identity. Just like in the first game, many of these sets will require unique resources. And in order to craft items from the Dragon Scaled armour set, you’ll need Dragon Claws and Dragon Teeth. So, where to find these items? As suggested by their description, you can get Dragon Claws by slaying dragons, drakes, and dreki.

For example, you can get a Dragon Claw by slaying the Gravel Belly. That’s a boss fight in the deserts of Alfheim. Killing this gorgeous yet dangerous beast will also net you a dragon tooth and Skirnir’s Gambanteinn. You’ll reach this location by doing the Desert Door favour. The Crag Jaw boss fight is another location which will have a claw, purified crystalline, and a dragon tooth. You encounter this boss fight while doing the Quaking Hollow favour. Fallen Drekki will also grant you unique resources for the Dragon Scaled armour set. For example, during Freya’s Missing Peace favour you’ll encounter a Drekki who will attack you when you try to use a boat near the lake. With that said, that’s all you need to know about finding this unique resource.

NEXT POSTGod of War Ragnarok No Sound on PS5, Audio Bug Solution

How to Unlock 5 Star Tera Raids Pokemon Scarlet and Violet