Prison Break is the second heist in GTA Online. It’s a four-player mission that consists of four set-up stages and the finale. The leader’s expenses are 10% of the potential payout, and range from 20 to 50 thousand dollars, depending on the difficulty level. Keep in mind that this amount has to be paid up front, and the leader doesn’t get any return on his investment until the heist has been completed.

The rewards depend on the difficulty level, and are as follows: The first time you complete the heist you will also unlock the following vehicles: Lampadati Casco ($680K) on the Legendary Motorsport website, Velum 5-Seater airplane ($995K) on the Elitas website and Prison Bus ($550K) on Warstock Cache and Carry. Gosu tip: the 5-seater Velum is worth half a million more dollars than a regular Velum, and the only difference is that it has an extra seat! Don’t waste your money on it. 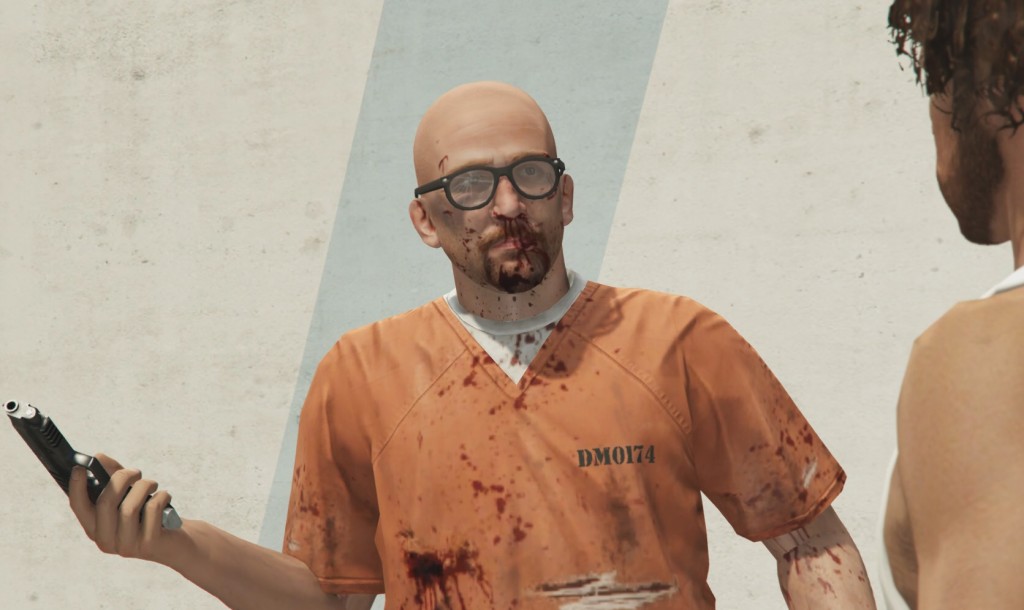 Your group will be divided into three gunmen and a pilot. Go to McKenzie Airfield to hijack a plane from the Vagos gang. The important things to know here is to not damage the plane and to not get killed. Stay in cover as you dispose of a lot of Vagos gang members that will be arriving in waves via cars. Players usually go into the hangar, where the plane is, and fight from there. Your pilot can attempt to take off early, but you are certain to get shot at by the remaining enemies so it is a risky strategy. It is best to wait until all the enemies are cleared. The pilot will have to fly the plane to the main Los Santos airport to complete the heist.

Your group will all be a part of the same team. Head out into the Grand Senora Desert, and steal the Bolingbroke Prison Bus that is transporting an important prisoner. A good way to go about this is to shoot the driver as soon as possible (do the same to escort car drivers). Once you’ve stolen the bus, one of the players not driving it has to shoot down a police helicopter. I recommend that the driver stops off the road (so you don’t have many squad cars next to you) and that other players come out and shoot down the helicopter. By driving the bus off road you will lose the cops more easily and then you just have to deliver it at the waypoint.

You will be going to the Port of Los Santos to steal a car from a ship full of Korean gang members, so bring good guns. Once you’ve dealt with the enemies, climb to the top of the container stack and shoot the padlock of the designated container. Inside, you’ll find the Lampadati Casco that is your target. Use it to jump off the ship, then start driving towards the meeting point in the desert. Don’t waste bullets by shooting at your pursuers – they’ll just keep coming until you pass a certain point on the map.

You have to steal a police cruiser first. To get one you can either commit crimes to get a wanted level (and get cops to come to you in their cruisers), or just dial 911 on your phone. Once you’ve got it, lose the heat and go to the Mission Row police station. Walk casually in and grab the transport schedule from the first room to the right of the entrance. Get back to the cruiser and take it to the underpass near Lester’s warehouse. All that’s left to be done is douse it in gasoline and set it on fire. Now return to the planning room.

Once again, you’ll be split into two teams – City Hall one and Mansion team.

Bring your long range weapons (snipers and such)! You’ll need to climb a building across the road from City Hall – there’s a ladder in the back that will allow you to do this – and kill the two lawyers. You need to coordinate with your heist buddy so your shots are simultaneous. Make sure you use your mics or be quick when you see him shooting. After that’s done, pick up the documents they were carrying and run (you’ll probably have to clear out about two dozen cops in the area first, but you won’t get a 5 star wanted level, which is nice). Once you lose the cops, go back to the apartment.

The other team goes on a stealth mission. You need to go to Richman, sneak into a mansion and assassinate the owner. If any of his guards see you, he’ll try to escape. You can still get him after he starts running, but you need to be fast. The best way to approach this task is by picking off as many guards as you can from the outlook near the mansion, using a silenced sniper. Then switch to silenced pistols and head inside. Once the target is dead, go back to the planning room.

You will split into three teams for the Prison Break finale – Demolition, Pilot and Breakout crew (officer and prisoner).

Dressed up as prisoner and prison officer, reach the prison bus you hijacked in the setups and go to the prison. Do not alert the guards. Once inside the prison they will make you out no matter what you do. Start fighting your way up on the roofs and walkways above ground. As you dispose of regular prison guards you will finally reach Rashkovsky in the yard. Before triggering the Rashkovsky cutscene you can have the Demolitions guy provide air support with the Buzzard he stole. Just make sure he stays far from the prison or he’ll get shot down. Special police forces will start attacking after the Rashkovsky cutscene. Move from cover to cover as you kill the oncoming NOOSE special forces. When you clear all the enemies` you can tell your pilot to land near the prison.

The demolitions man will need to steal a prison bus from the Great Chaparral area, killing the driver in the process. Drive it out to the Sandy Shores Airfield and destroy it. After that, go to the far end of the airfield and steal a Buzzard helicopter. You can use it to destroy any Lazer fighter jets that might be pestering your pilot, in case the pilot decided to fly to Sandy Shores before Rashkovsky is rescued. You can also go to the prison and provide covering fire to the breakout team. Make sure you stay far enough from the prison because you’ll get shot down if you get too close. As the breakout is completed and pilot lands near the prison you have to provide covering fire for the airplane. Shoot down any police shoppers in pursuit and follow the airplane as much as you can to provide support.

As a pilot you need to go to LSIA to pick up the airplane you hijacked in the setup. Fly towards Sandy Shores Airfield and you will get attacked by fighter jets! You can keep flying over Los Santos instead and that should prevent jets from finding you. If you are feeling lucky, go to Sandy Shores and avoid jets by flying in circles and flying under bridges (very tough to do if you do not have max flying and lots of practice) and hopefully the Demolitions guy will help you with his Buzzard helicopter. At the same time, the ground team should be breaking Rashkovsky out of prison. When they do manage to do that, you should go towards the prison and land on the road leading out of the prison so others can join you quickly. Once they do, jets should be called off, but police choppers will go after you. Preform evasive maneuvers and keep climbing towards the drop point.