Recently, the hit Roblox game Adopt Me got a very interesting update. Namely, a new minigame was added into the game, called the Frost Bridge. Obviously inspired by the mega-popular Netflix TV show Squid Game and one of the deadly games the characters played there, it’s a very hard game to play – and even harder to win in it. To help you do just that, we’re going to explain everything you need to know about how to play and win the Adopt Me Frost Bridge Minigame. 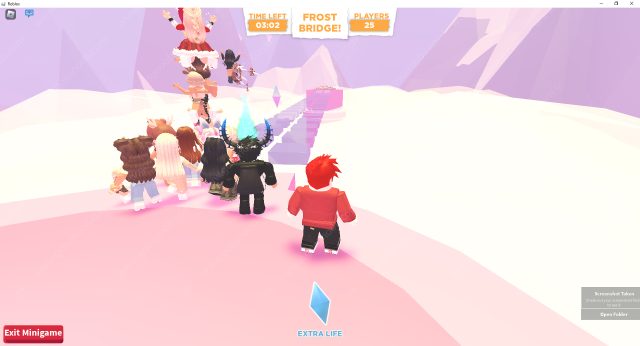 How to Win Frost Bridge in Adopt Me

First, let’s go over the rules of this minigame. Once you start the Frost Bridge Minigame, you’ll see a long “bridge” consisting of two columns. You need to jump from platform to platform and get to the end. Your reward for doing so is going to be a bunch of Gingerbread. The problem is that, for each of these platforms – one is safe, while the other one will break and cause the player standing on it to plummet to their virtual demise. To make matters even more complicated, you only have a limited amount of time to get to the other side.

So what is the best strategy here? Well, if you are playing on an open server, the best course of action here is to take it slow and to play carefully and deliberately. Don’t rush in, but let the other players take the lead and make the right moves – or mistakes. With any luck, you’ll be able to complete this without too much effort. On the other hand, if you are playing on a private server, this will result in a much shorter bridge – only about 8 platforms. To make sure that you get to the other side, the best method here is to play with your Alt, and use it to “scout” ahead and see which platforms are safe.