A brand new season has just started in Forza Horizon 5. And you all know what that means – plenty of new things to do in this exciting racing game, including new challenges. One of these is the Blazing Thunder Treasure Hunt. The Treasure Clue for this Treasure Hunt reads: “Come as you are for a blazing trilogy across any trails.” But what does that mean, what do you need to do here? Well, to help you get that 50,000 CR prize for completing this TH, our Blazing Thunder Treasure Hunt in Forza Horizon 5 guide is here to tell you everything we know about it. 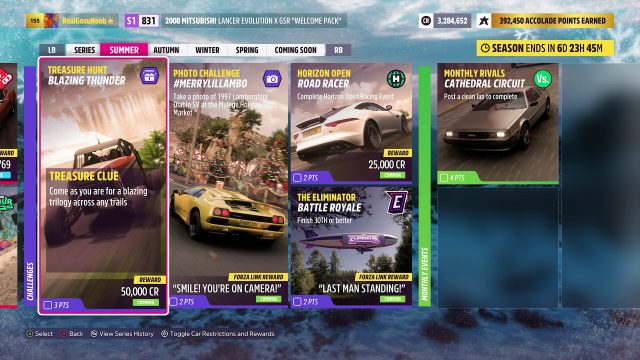 Update:Blazing Thunder Treasure Hunt is bugged. If you’ve already completed 3 starred all trail blazers before, you’ll not see the red circle showing the region of the treasure chest. The car doesn’t matter. In the screenshots below you can find location, but if it’s not red for you, you’ll have to wait for developers to solve the problem.

We would like to say a big thank you to Dot for detailed explanation in the comments below and treasure chest location:

So, as I was saying, I just did the Canyon Run trailblazer with a Lambo Sesto Elemento FE because I was there and had 2 stars on the run previously and I was thinking that I should just try it with that car. After finishing with 27.3s the Treasure hunt location unlocked, it is in the Cascadas del Aqua Azul region. Unfortunately for 1 hour I searched for the damn thing and I can’t find it. Really that was the only trailblazer I did and it unlocked the zone, I was just setting some speed records on the zones in the region… There is no other trailblazer that I did since I hate the things and I only started playing 20 minutes earlier… I might have gotten lucky or nailed a bug… but if you want proof, here is a screenshot of the unlocked region… Unlocked region

Currently, it doesn’t seem like anyone knows the solution for this particular Treasure Hunt. We’ve attempted several things in order to complete it. Our first instinct was to attempt to do this with the car model featured in the image for this Treasure Hunt – the 2015 Alumi Craft Class 10 Race Car and to drive three Trailblazers with it. This didn’t prove to be the right solution for the Blazing Thunder Treasure Hunt. We are busy at work trying out different things and we will crack this problem soon enough. When we do, we will immediately update this guide to reflect that and provide you with the correct way to finish it.

In fact, odds are probable that this is some sort of bug that is preventing players from completing this challenge. Players are commenting that everything about this challenge seems to point in that direction and that this is the reason why it’s currently practically impossible to figure out what you need to do here. Of course, if you know what the trick is here, we invite you to share it with us – and other players – down in the comments below.