The recent release of the GTA Trilogy: Definitive Edition saw the update of three seminal GTA titles. These are: GTA 3, GTA Vice City, and GTA San Andreas. Besides updating the graphics and sound and moving the games to the Unreal Engine, the trilogy is more or less the same as it always was. This includes the weapons. Besides the open-world structure, the engaging storyline, and memorable characters, GTA was always very well known for the arsenal of weapons you can use to wreak havoc. In GTA San Andreas, the knife and baseball bat are some of the early melee weapons that you will be able to find. They may not have the oomph of their ranged counterparts, but that doesn’t make them any less fun to use. In this Knife & Baseball Bat Locations – GTA San Andreas Definitive Edition guide, we will cover where they can be found. 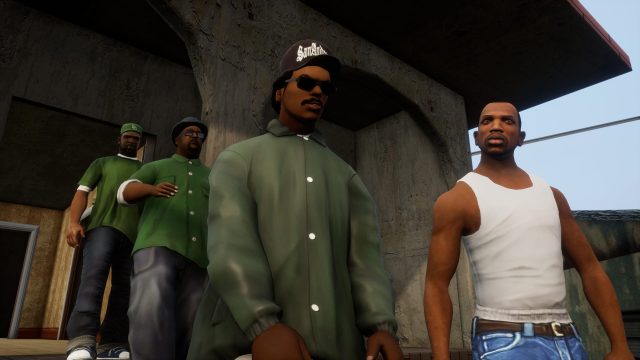 The knife in GTA San Andreas Definitive Edition can be found in eight locations in the game. We have marked all of these on the map below with a red circle. The knife in this game resembles the SOG SEAL Pup, and looks truly vicious. It’s used in many missions, including Madd Dogg’s Rhymes, Amphibious Assault, The Da Nang Thang, Dam and Blast, and Vertical Bird. This is because the knife allows CJ to perform stealth kills if he is standing directly behind an unsuspecting opponent.

The baseball bat is another iconic GTA melee weapon, appearing in every GTA game since the 3D Trilogy. Like the knife, we’ve marked all the locations where you can find a baseball bat in GTA SA with a red circle. The baseball bat is a pretty powerful weapon, and it will kill most characters with two hits – the first hit knocking them to the ground, and the second one to finish them off.