Though it hasn’t been out for long, Mario Strikers: Battle League has already cemented itself as a very fun sports game. Combining soccer with arcade elements, your team is made up of classic Super Mario characters such as (of course) Mario, Peach, Bowser, and so on. But there are many other characters from this long-running franchise that haven’t been added to the game. At least, not yet. This is about to change with the first free update to the game, which is going to add Daisy and Shy Guy as playable characters. We are going to tell you when this Daisy and Shy Guy Update for Mario Strikers is going to release, the precise date and time. 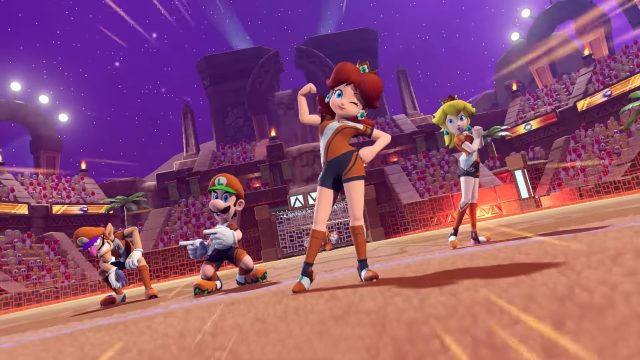 The update for Mario Strikers: Battle League is scheduled to release this Thursday, July 21st, 2022, at 6 PM PT. The biggest addition in this update is the inclusion of two new characters – Daisy and Shy Guy. Daisy is billed as a “Technique type that won’t get knocked down.” Indeed, her high technique score – 18/25 – is a testament to that. On the other hand, Shy Guy is presented as an “All-rounder whose gear choices are key.”

Besides these two characters, other things are also being added to the game. This includes the Knight gear, which increases Strenght and Shooting (not to mention looking very stylish). There’s also a brand-new stadium coming – the Desert Ruin. As its name suggests, this is a desert-themed station, featuring lots of sand and big columns and other ruins of some bygone ancient civilization. Personally, we can’t wait to try all of these out. Nintendo have confirmed that we can expect to see two more similarly-sized updates in 2022. These are also set to add new characters, gear, and stadiums, so the game is going to get even bigger and better very soon.

NEXT POSTHow to Unlock Characters in MultiVersus