Minecraft Dungeons is out today, but some owners of the game are unable to play it. A number of players have reported getting an error that says the game does not work on this device. There’s a simple way to get around this issue, but it has to do with Windows 10, so it’s anything but intuitive. If you’re experiencing this problem, our Minecraft Dungeons does not work on this device error guide will show you how to get around it.

Does not work on this device – Windows 10

If you’ve already bought the game and then learned you can’t play it because it “does not work on this device”, it’s an issue with Windows 10. You need the latest version of it, and that doesn’t just mean installing the latest updates – the ones that are automatically downloaded and oftentimes even installed without your input. What you need is a special “feature update” that will push your Windows 10 installation to version 1909. 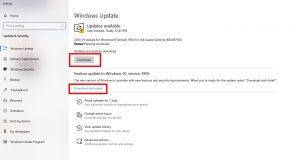 Open up the start menu, then type “settings”. Open up the settings and go to “update & security”. The first button, the grey one, is used to download and install regular updates. You’ll needto do so, but you’ll also need to click on the link below it to download and install the feature update. Once it’s all done, open up the settings again and check if there aren’t any more updates that have appeared in the meantime. If not, you’ll be able to play now.

Some players can’t even install the game. The Windows store notifies them that there are no supported devices linked to their account, and the install button is greyed out. You can try to get around this by using the method above, but it might not work. If it doesn’t, there’s not much else you can do – it might be a problem on the developers’ end.

NEXT POSTCrossplay in Minecraft Dungeons