Krypt chests are loot containers in Mortal Kombat 11. They can be opened using one of MK11’s three currencies – koin, soul fragments or hearts. Each chests gives you at least one cosmetic, crafting or key item. Since there are so many, you’ll want to open as many as you can in order to maximize your chances of getting something you actually want. This guide is going to show you all MK11 Krypt chest locations, so you can speed up the grind.

Note: This guide is a work in progress. We’ll add more locations as we progress.

There are three types of chests / containers you can find in the Krypt. Some chests only require you to deposit koins in order to open them. Once you’ve opened all koin chests you can interact with Kronika’s Time vault to reset them. Now you can reopen all koin chests. These are your primary source of character customization and materials.

There are two additional chest types and once you open them you can’t reset them to open them again. There are soul chests that consume soul fragments. To get these you need to win matches in any game mode. They also sometimes drop in small quantities through various other activities in the krypt. Soul fragment chests do not really look like chests. They are more like cylindrical cages with a green glow to them. Lots of them are found in the Dead Woods area west of the main courtyard. Second type of chests are opened with hearts. There are two subtypes of these. One has a flaming skull and the other has what looks like Shao Khan’s helmet on top of them.

To be able to open chests with burning skulls you will have to douse the flames first. This is done by pulling a nearby lantern using Scorpion’s Spear. Once you do that you’ll be able to open them for 100 Hearts. Chests with Khan’s helmet are more special and we’ll talk about them in the next section.

Although almost all chests in the krypt give out random rewards there are some that give the same rewards to all players. The very first two chests at the Krypt’s entrance give everyone 50000 koins and 100 hearts. Then, there are the koin chests in the Palace Entrance area of the game. This is the first area past the Krypt’s entrance. Eleven of these always give the same rewards and are not RNG based. Heart chests are the second type of chest that gives the same reward to all players. These have what looks like Shao Kahn’s helmet on top of them. You first need to smash that helmet with your hammer. They will then require 250 Hearts to open. Let’s cover the MK11 permanent reward koin chests first. These are important because you can get some brutalities and a Skeleton key in them. 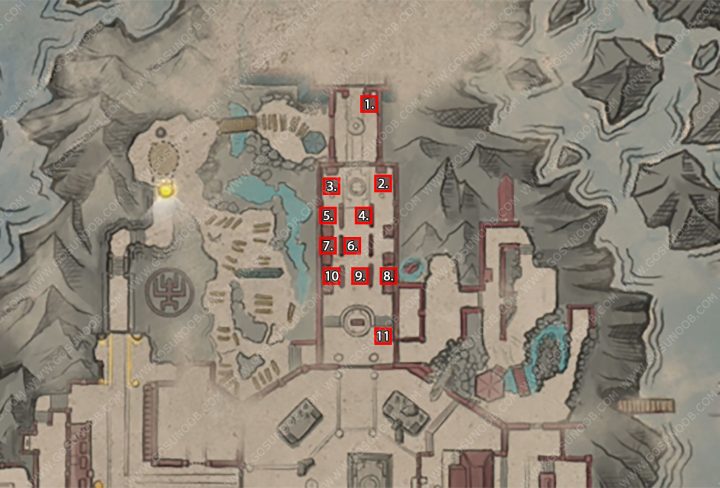 Mortal Kombat 11 chests with something that resembles Shao Kahn’s helmet on top of them can be opened with 250 hearts. Hearts are earned in the game primarily by doing fatalities. You also get them by pulling corpses with Scorpion’s spear in the krypt and doing other activities there. To be able to open them you first have to smash the helmet with your hammer then it will ask for hearts. These chests are special because they have permanent rewards and not random like koin chests do. They also have some of the best loot in the Krypt. We will prepare a list of rewards as soon as we get enough hearts. For now here’s a map of MK11 heart chest locations in main areas.

There are four chests in the room you first spawn in. They can all be freely opened, and will provide you with the starting resources. The long corridor in the Palace Entrance is home to another 16, but some are only visible if you use Kenshi’s Blindfold. You can open them all using coins.

If you use the hammer to break the wall in the southwest, you’ll end up in the Dead Woods. There’s about a dozen soul fragment chests there, as well as a dozen koin chests. They’re all easily accessible, apart from one that requires Scorpion’s Spear and another that’s behind a locked gate.

The Courtyard is practically littered with koin chests – there’s at least 40 of them there. Most are easily accessible, although some are invisible, and a handful are behind barriers you can break with your hammer.