Don’t know how to complete the MultiVersus Knockback Influence tutorial? The early access beta for the free-to-play crossover fighting game MultiVersus is here, and many players are already exploring new content. However, there are many problems at launch as well. Some are server related, while others are gameplay issues. One such issue is related to the MultiVersus tutorial. Namely, the Knockback Influence tutorial. The instructions for the second part say “Hold down and left to rotate your Knockback and avoid getting rung out”. However, for many players, the MultiVersus KBI tutorial is not working. Here’s what we know about it and how can you finish it. 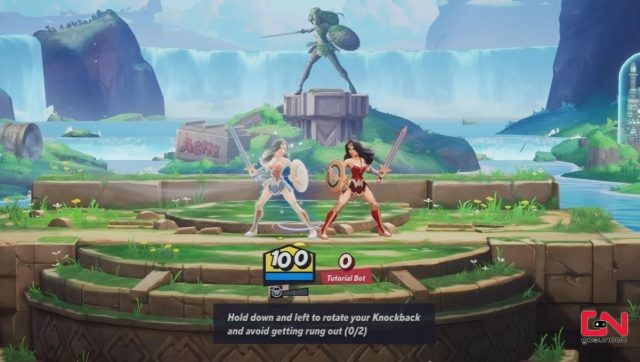 Knockback Influence is one of the short tutorial missions in MultiVersus. Being a complex fighting game, MultiVersus has an elaborate tutorial system designed for players to learn everything about basic and advanced mechanics, so that they can understand how the game works. Knockback Influence is one of the advanced tutorial missions, and it consists of two parts.

The first part is rather easy, and no one is having problems with it. However, the second part is where the trouble starts. It says: “Hold down and left to rotate your Knockback and avoid getting rung out”. It sounds straightforward enough, but players keep getting knocked out. No matter what angle you try with Wonder Woman, it seems almost impossible to complete it.

This is most likely a bug. Developers probably did a rebalance of knockback but forgot to change that in the tutorial. Nonetheless, until developers fix it, the community suggested a few workarounds. For PC, Reddit user shankdaddy880 suggests this solution:

“Just use your keyboard. Don’t hold down and back the whole time, just hold down. Then tap left after you get hit like 2 times. It takes a little while to get the timing down but I can do it every time now,” he wrote. “Think of it like you’re holding down to adjust the angle, and tapping left is like tapping your breaks to slow down.”

For consoles, both Xbox and PlayStation, there’s a different workaround. Hold Down and Left on your left stick, and then press your PlayStation button. Then press it again to enter the game. Do the same thing on your Xbox controller. And that’s it, this should hopefully do the trick.