Arcane is a brand-new Netflix animated show, set in the League of Legends universe. Absolutely gorgeously animated by French studio Fortiche Production, it has a large cast of characters. One of the first ones we will meet is none other than Milo. In fact, it is he that, along with Vi, Powder, and Claggor, and their actions that kick off the series of events in the wake of their botched burglary. A group of orphans living on the seedy streets of Zaun, each of them specializes in different aspects of breaking and entering. In this Mylo Arcane League of Legends guide, we will take a look at Mylo and his role in the Arcane TV show. 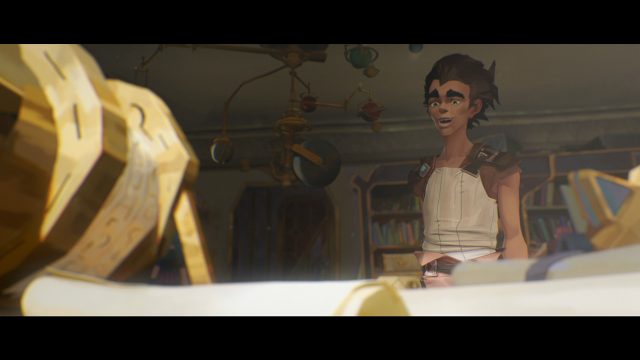 Who is Mylo in Arcane LoL

Note that we are going to be tackling quite a few spoilers here. So, if you would rather watch the show beforehand, now’s your chance to do that and then come back. After the flashback which sets up how Vi and Powder met their mentor Vander, we are introduced to the entire gang. Led by Vi, they are preparing to pull off a huge heist. It is here that we will get to understand the roles of each gang member. Vi is, obviously, the leader. Powder is her little sister. Inquisitive and fearful, it’s obvious that she would rather not have to make her living thanks to crime. Claggor, physically the largest member, is the team’s muscle.

And then we have Mylo. The only member of the team that can pick a lock, he is at odds with the much more brash Vi. Mylo is voiced by veteran voice actor Yuri Lowenthal. Best known for his anime voiceover work, Yuri has also worked on a lot of western animation and computer games. His most notable role in video games is without a doubt lending his voice and motion capture to Spiderman in 2018’s Marvel’s Spider-Man. Unfortunately, Mylo tragically dies during episode 3.