Being an RPG looter shooter, Tiny Tina’s Wonderlands has many side quests which will let you grind XP and further explore the world. One such side quest is called A Knight’s Toil, and as a part of it, you will be tasked with performing a slam attack on Llance’s Mushroom. Seemingly simple, this objective has many players confused, as they are not sure how to complete this mission. The game doesn’t tell you how to execute a slam attack, and it is definitely not something obvious. If you don’t know how to slam attack Llance’s Mushroom in Tiny Tina’s Wonderlands, read on. This guide will explain step-by-step what you need to do. 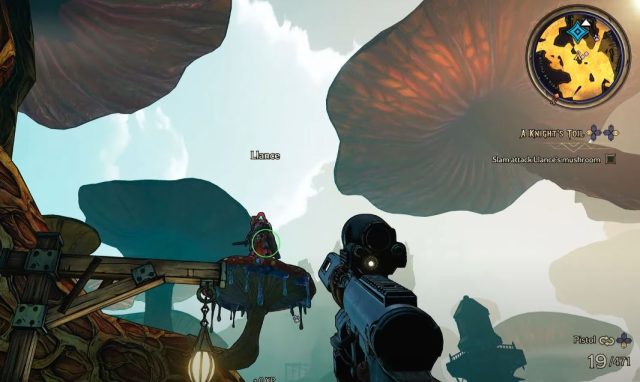 How to Slam Attack in Tiny Tina’s Wonderlands

Although it might seem like some complicated thing to perform, a slam attack in Tiny Tina’s Wonderlands is actually rather straightforward. You just probably didn’t have an opportunity to try it out. But if you check the controls menu, it’s right there. Called “Ground Slam”, the slam attack shares the same button as crouching and sliding by default. And on PlayStation consoles, that’s the “O” button.

Now when we’ve established which button to use for the attack, let’s see what we need to do in this particular situation where we need to slam attack Llance’s mushroom. When Llance positions himself on a mushroom that grows from a tree, you need to use a nearby mushroom growing from a stump. The moment you stand on it, it will propel you into the air. What you need to do from here is to aim yourself so that you fall on Llance’s mushroom. And right before you fall, use your slam attack button. This will prompt your ground slam attack and catapult Llance into the air. And that’s it, the quest is complete! Shout out to WoW Quests for the screenshots, make sure to check their video for a visual guide!