Did the Alpha Wolf disappear in V Rising for you? In the very early stages of V Rising, players will be tasked with a series of missions called Blood Hunt. To start, we will need to construct a Blood Aldar. Upon interacting with it, we will learn about “powerful V Blood carriers”. Our quest is to track them down one by one and defeat them in a battle, upon which we will absorb their powers and knowledge. The very first V Blood carrier we will face is the Alpha Wolf, from whom we will get the Wolf Form ability. His location is seemingly simple to find, but for some players, he mysteriously disappears. In this guide, we will explain where to find the Alpha Wolf and how to beat him. 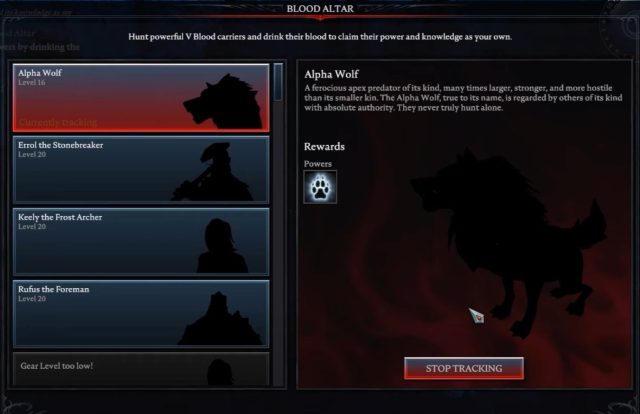 Where to find Alpha Wolf in V Rising

To start the search for the location of the Alpha Wolf, interact with the Blood Altar and then click on the blue “Track Blood” button on the Alpha Wolf’s page. This will activate tracking in the form of a reddish mist which represents the Alpha Wolf’s scent. Follow the scent through the starting area, Farbane Woods, until you reach the Alpha Wolf’s current location. He might be near the Wolf Den, but he will also roam the woods randomly.

While he’s fairly easy to find, some players are experiencing a bug which results in his trail leading to nowhere. Luckily, this is just a minor bug, and you will be able to find him even without the trail. Just search the general area of Farbane Woods, as he is roaming around. If you are still having issues, what you need to do is to the Unstuck option in the Esc menu. This will restart your current activities, allowing you to reactivate the blood tracking.

As one of the very first bosses you’ll encounter, the Alpha Wolf is fairly easy to defeat. He has a charging attack which is telegraphed by its wind up. When he charges and misses you, use this opportunity to attack him. He will also summon other smaller wolfs to attack you, and we advise you to deal with them first and then continue with the alpha wolf. Once you beat him, he will give you the Wolf Form ability.