JoJo’s Bizarre Adventure is one of the most popular manga and anime franchises of all time. Spanning across multiple time eras and characters, its third part, Stardust Crusaders, introduced the concept of Stands. These superpowers can do practically anything, so it’s no wonder that many games focus specifically on them and their use. Such is the case with the Roblox title World of Stands. Since it features many Stands that you can use, you’re no doubt asking which ones are the best, and which ones you should not bother with. We’re going to rank all of the Stands according to their power levels in this World of Stands Tier List. 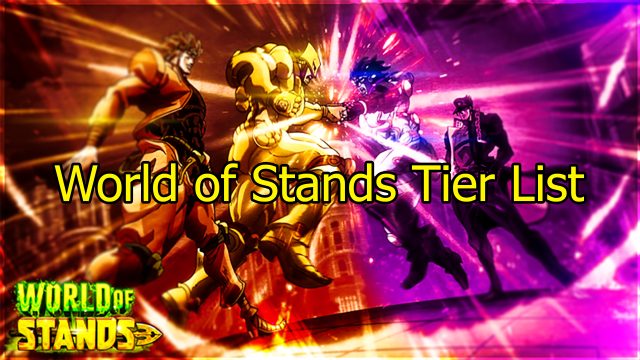 The rankings are going to be from the most powerful (S tier), all the way down to the least powerful (C tier). These Stands also differ by rarity levels, ranging from Legendary, to Common. To make things easier, we are also going to write the rarity of each Stand, so that you know how difficult it is to get. Of course, it should go without saying that this is only our personal opinion. So if you have a Stand that you think should be rated lower or higher than we have done, then don’t be shy about voicing your opinion in the comments. Also, a Stand being ranked lower than another doesn’t mean that you won’t be able to play the game with it – only that it is easier to do so with a more powerful Stand. And now, let’s see the rankings themselves: