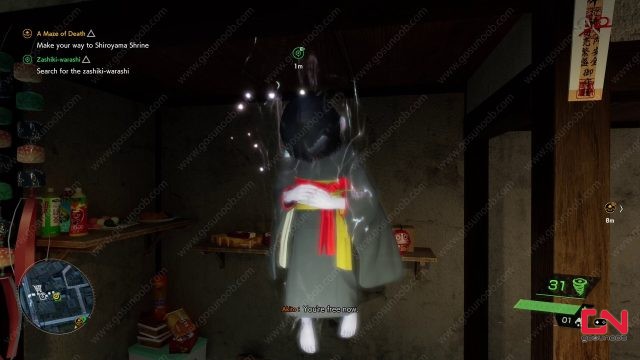 Where to find spirit Zashiki-Warashi in Ghostwire Tokyo?

Search for Zashiki-Warashi in Ghostwire Tokyo

In a room to the left of the entrance, you’ll see a suspicious stain on the wall, indicating that something was clearly there before, but now it’s gone. We’ll come back to that later. In the storage room, you’ll find the first part of the landlord’s diary. There he admits taking Zashiki-Warashi hostage. Now head back to the living room, and open the wall cabinet left of the TV. There you will find a locked safe. And we need to find a key to open that lockbox.

Where to find Safe key in Zashiki-warashi Ghostwire Tokyo

In a hallway to the right of the entrance, on the very end of it, you find another diary entry on a stool. There, the landlord talks about a lockbox we just saw in the living room. He says that he has stashed the key in the Buddhist altar. With this information, now we need to go back to the first room with a stain on the wall. Stand in front of the stain and use your Spectral Vision. And this will make the Buddhist altar appear where the stain was. Open it and grab the key. Now head back to the safe and use the key to unlock it.

Inside the lockbox, you’ll find a house floor plan. There, you’ll see that there’s a hidden room in the left part of the house. Head there, use your spectral vision, and sliding doors will appear where a wall once was. Enter inside, defeat the Landlord’s Specter, and behind him, you’ll see a blue bowl. Put some Shio Senbie inside (which was given to you by the old lady at the start of the mission), and this will prompt Zashiki-Warashi to appear. Talk with her and set her free. Now go back to the old lady and talk to her to complete the mission.