Magnifying lens is an item in Zelda Link’s Awakening. It’s a tool that lets you see things you otherwise wouldn’t be able to. You’ll first hear about it when you open up the black book in the library in Mabe Village. In order to acquire it yourself, you’ll have to perform a series of trades, giving items you don’t need to people who really want them. In this guide, we’re going to show you the Zelda Link’s Awakening Magnifying Lens location, as well as a detailed description of the trading sequence.

How to get Magnifying Lens?

The trading sequence starts once you’ve obtained the Yoshi Doll from the Trendy games claw machine in Mabe Village. From then on, you’ll trade one item for another by talking to a bunch of characters around the world. At the end of the sequence, you’ll get a certain something that’ll unlock the secret cave in which the magnifying glass rests. 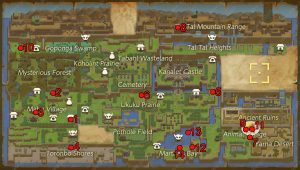