Red box-shaped ghost is one of the bosses in Luigi’s Mansion 3. You’ll encounter him at the escalator, after you get he star key from the barber shop. He’s going to activate a sprinkler and melt Gooigi, and when you start going up the escalator, he’ll show up and try to stop you. You’ll have to fight him in a tiny arena, and he has a lot of health, however, it’s not a particularly hard fight if you know what to do. This guide is going to show you how to defeat big red box-shaped ghost in Luigi’s Mansion 3.

How to beat red ghost at the escalator?

As for defeating it, you will have to use the Strobulb first. Blind the ghost with your flashlight, and he’ll stay stunned for a few seconds. While he’s out, use the vacuum to damage him. E.Gadd says it’s best to circle him while doing so, but we didn’t see any benefit to that. Just blind him, then start sucking. 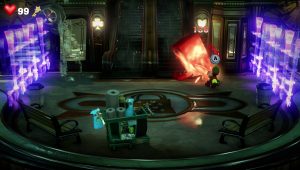 When you’ve done enough damage, you’ll get the chance to slam him into the ground several times. Keep your eyes peeled – when a prompt to press A appears, keep pressing it as long as it’s there. This will take away a big chunk of his health. You’ll have to repeat the whole process at least once more, but if you get your timings right, he’ll stay stunned from the first time you Strobulb him in the face.

NEXT POSTLuigi’s Mansion 3 Achievements – How to Check