Remnant decryption is a kind of puzzle in Mass Effect Andromeda. It requires you to play a game of alien sudoku, where a wrong guess spawns a group of enemies. Understandably, most people would want to avoid that. In this guide, we’re going to show you how to solve Mass Effect Andromeda Remnant Decryption puzzles.

How to solve Remnant puzzles

If you’ve ever played sudoku, this is exactly like it, only with glyphs instead of numbers. It’s a tad more deadly, though – if you submit a wrong solution, a wave of enemies will spawn around you.

Here’s how it works: the red glyphs are set. Your task is to fill the empty grid spaces with blue glyphs. Each row, column and highlighted square can contain only one of each glyph. You should always start from the space that’s missing the least glyphs, and work your way from there. The hardest part is memorizing the glyph shapes, so you don’t have to double-check every move. Once you know each glyph by heart, the puzzles become much easier.

If you still can’t be bothered with them, there’s a way to override these alien puzzles. Each override requires a consumable called the Remnant Decryption Key. Every Remnant console will offer you the chance to skip the puzzle by using up a certain number of these. If you solve all Remnant puzzles, you’ll get the Cryptographer trophy. You can check out our Mass Effect Andromeda Trophy List for more info.

During the quest “A New Beginning”, you’ll be introduced to how Monoliths and Vaults work in Mass Effect Andromeda. During this mission, you’ll have to activate three monoliths. One of them will require you to solve a puzzle, and all three will require you to scan for glyphs.

After you’ve completed the first monolith and met Peebee, head southwest to the second one. Here, you’ll have to solve a Remnant puzzle. After you’ve scanned all of the glyphs, interact with the main console to start the puzzle. Since it’s the first one, it’s not to difficult. The only thing that might be a problem is deciphering the glyphs, since some look a little similar to each other. Here’s the solution. 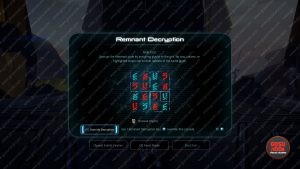 After you’ve completed one more monolith, it’s time to head to the Vault. Once inside, you basically have to follow the yellow nodes, killing enemies and solving minor elemental puzzles on the way. At one point, you’ll arrive at one of the gigantic, mushroom-shaped plants tucked away in the corner. There’s a container there that’s locked with a Remnant puzzle, as well as some more glyphs to scan. After scanning, you can proceed to open the container. The location and solution is below.

One of the optional Remnant puzzles on Eos is connected to the Side Ops mission “Ghost of a Promise”. After you’ve scanned (at least) three datapads in Eos Remnant sites, you need to go into a vault in East Eos. In there, you’ll find three datapads from Ana Carrell (Day 1, Day 8 and Final Entry). While in there, you can go up and interact with a console that opens a secret door. Behind this door is a Destroyer Remnant, so be ready. After you’ve defeated the enemy, go inside and look for a container locked with a Remnant puzzle. Here’s how to solve it and where the vault is.

During the mission “Helping Havarl’s Scientists” (unlocked when you pick up Jaal on Aya and leave the planet for the first time with Jaal on board the Tempest) you will have to help researchers trapped at a monolith. Go east, then south from the research station and, after you defeat some remnant in the monolith, you’ll find the scientists in a stasis field. Scan around the remnant console to discover the glyph to the left of it. The solution is as follows: 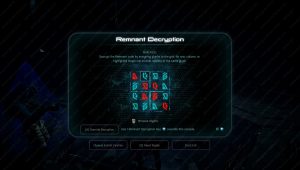 After completing the mission with the puzzle above, you start “A Dying Planet” quest by talking to one of the rescued scientists. This is a long quest, at the end of which you’ll reach Havarl’s vault. Once inside, you have to unlock the door by making each console laser glow white. You have to activate them in order of the number of glowing orbs next to them. Next, you solve the remnant sudoku puzzle in the following way: 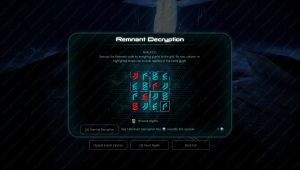 There’s one more Remnant puzzle you might run into on Havarl. There’s a secret fusion mod on the planet, and you’ll have to go through several steps to get it, one of which is the puzzle. The first step is to locate a console east of the Pelaav Research Station. Scan it and follow the yellow line and climb the construction to reach the next console. Interact with it, and it will point to where to go next. When you reach the puzzle console, this is what you need to enter to unlock it.

From there, follow the beam of light to the next step. For more info on fusion mods, check out our Mass Effect Andromeda Fusion Mods guide.

Three puzzles need to be solved during the “Restoring a World” side quest. The southeast Remnant monolith requires you to find Synaptic, Semiosis and Zero Glyph. Zero Glyph is on the floor in the same room where the Remnant console for solving the puzzle is at (scan the floor and follow the line to find it). Two are outside, on a black block next to the tall Remnant tower. (both are on the same block).

The west monolith is found inside a cave you approach through a gorge. Two glyphs are on top of the pillar above the console, and one is on a black block when approaching the console from the entrance into the cave.

Once you reach the north monolith (follow the quest marker to it), you should find two glyphs on top of the pillars that are arching over the spot where the Remnant console for solving the puzzle is at. The third glyph is on the platform behind the third pillar northeast from the console.

Here are the solutions for Voeld Restoring a World side quest Monolith puzzles:

There’s one Remnant puzzle in Voeld’s vault. It’s located in the top section of the map, at the end of the right-curving hallway. Sovling the puzzle will grant you two Skill Points. Watch out, though, since a Destroyer and two Assemblers will be waiting for you there. Also, beware the deadly cold in the vault (and Voeld in general). This is how to solve the Remnant puzzle, and where it is in the vault.

One more Remnant puzzle you can find on Voeld is connected to Peebee’s loyalty mission chain. After you’ve completed the vault on Eos, you can try to enter the escape pod and talk to Peebee there, so that she’d reveal her secret project and start the “Peebee: Secret Project” side quest. Next, check your email and find the one titled “Rem-Tech”. Once you do, you’ll get a new navpoint on Voeld. When you get there, you’ll see another Remnant monolith guarded by ten or so Remnant robots. Scan one more glyph hidden on one of the concrete construction on the monolith platform. This is the solution to the puzzle.

In the Remav system, there is only one planet you can visit called H-047C. You can access this system after a cutscene on the Tempest that happens once you’ve interrogated Vehn Terev in main mission “Hunting the Archon”. If you follow the few side quests here (find the codes in three domes in “From the Dust” and stop Krex) you will get to the “Remnant Tiller” side quest, at the end of which is this remnant glyph puzzle. Here’s its solution: 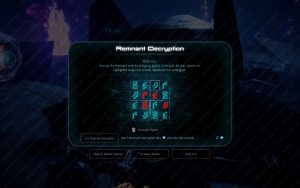 Kadara also has a terraforming side quest called “Healing Kadara’s Heart”. As usual, you’ll have to activate three monoliths, and then head to the core of the vault. Only the first monolith will require you to solve a Remnant puzzle, but you’ll have to do some extensive glyph scanning. Just scan the console and follow the yellow lines until you get where you need to be. The solution to the monolith puzzle is below. 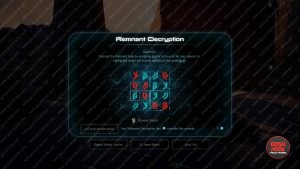 Inside the Remnant vault, there is one console that requires you to complete a puzzle. Solving it will grant you two skill points, and it’s located in the circular area off to the left on the map. Here are its location and solution.

The main quest that revolves around Remnant monoliths and vault is called “Taming a Desert”. There are three monoliths to activate before you can access the vault. Follow the quest markers to locate the monoliths, and be mindful to scan all the glyphs. The first two don’t require you to solve a puzzle, but the third will, and this is the solution. 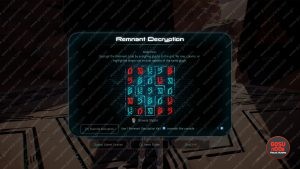 Once in the Vault on Elaaden, you might run into a room that has several consoles surrounding a square platform with another console on top. It’s the room after the one with four force-fields where you fight Turrets. This puzzle is completely optional, but it opens a shortcut to a chest with rare materials. The first step is to lower the consoles on the floor. You do so by interacting with the one that doesn’t have the cube-like construction behind it when you approach, and then follow that pattern. Once that is complete, the one on the platform is next. It’s one of the most difficult puzzles we’ve run into, but solving it gives you 2 Skill Points. Also, you can’t override it with keys. Take a look at the solution below.

One of the Side Ops chains on Elaaden allows you to visit the Remnant Derelict located on the planet. It starts with “conflict in the Colonies”, and you’ll have to go to The Paradise and talk to a krogan called Jorgal Strux. He’s in the Krogan group hanging around the dock. Next, you’ll have to go to the New Tuchanka colony. Take Drack with you. Once inside, locate the krogan Ravanor Brenk at Morda’s throne. It will trigger a cutscene. After it’s over, go and talk to Brenk again at the fighting pit several floors below. He’ll tell you about the Remnant Derelict. You can now go and visit it.

After you find the derelict (and kill the Remnant and scavengers on your way), you’ll come to a doorway leading inside. The console is locked with a Remnant puzzle, but you’re probably missing a glyph. Scan the console and follow the yellow trail leading you to the glyph, then scan it. You can now solve the puzzle, and here’s how. 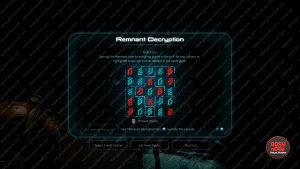 On your way to Meridian, you’ll be fighting kett and finding your way through a veritable maze. In the heat of battle, you might completely miss a door that’s locked with a Remnant puzzle. It’s absolutely there, though. Specifically, it’s on the main level of Khi Tasira, in Sector 17 – Research. It’s optional, but solving it leads you to a container with some valuable goodies. Just before you climb to a higher level where the quest marker is, look to the left and below. You’ll notice a platform with a door you can jump down to. The door is broken, but if you turn around, you’ll notice another door one more level below (so, essentially, under the spot you first dropped from). This door is locked with a Remnant puzzle that you can’t override. Here’s how to solve it and where to find it.

NEXT POSTMass Effect Andromeda Character Animations – No Improvements on Day One