There are nineteen hidden trophies in Monster Hunter World: Iceborne. You won’t know what these secret achievements are until you’ve unlocked them, which makes it much harder to get a platinum trophy. Some of them you’ll stumble upon naturally, but others require you to do stuff you wouldn’t even think of, like waiting at a certain spot for hours until a specific animal appears. If you’re tired of guessing, this guide will show you the list of all MHW Iceborne hidden trophies and how to unlock them.

In order to unlock this one, you’ll have to capture the Arrowhead Gekko. You can find this creature in the Rotten Vale, at any time of day. It likes to eat fruit, so constrain your search to fruit-bearing plants. It’s tiny, blue, glowing, and its head is the shape of an arrow. People have been capturing it in the south of area 10, on top of the ledge you can get to by climbing the vines and roots.

If you’re lucky, you’ll try to catch it during The Lord of the Underworld Beckons event, since it spawns on every expedition while that’s active.

This one requires you to capture a Goldspring Macaque. It’s a little monkey that looks just like the ones that hang around hot springs, only with golden fur. You’ll find it in Hoarfrost Reach, in any of the hot springs (like the one in the southwest of area 2). It appears throughout the day, and using a Ghillie Suit would be advisable, since it’s pretty rare and you don’t want to scare it away.

For this one, you’ll have to hunt down a Sealord’s Crestfish. It’s a majestic eel-looking fish with a golden crest. It’s found only in Hoarfrost Reach, at night. You can’t catch this one with a net, sadly, so you’ll have to fish properly. You can get it from the pond in the southwest of area 8. 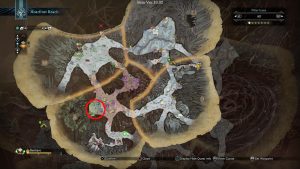