The third DLC for Call of Duty: Infinite Warfare, called Absolution Pack, brings four additional maps and a brand-new zombie experience. The zombie map comes with eight new trophies/achievements. Xbox One and PC players will have time to prepare for it, as it will come out on a month earlier on the PlayStation 4. 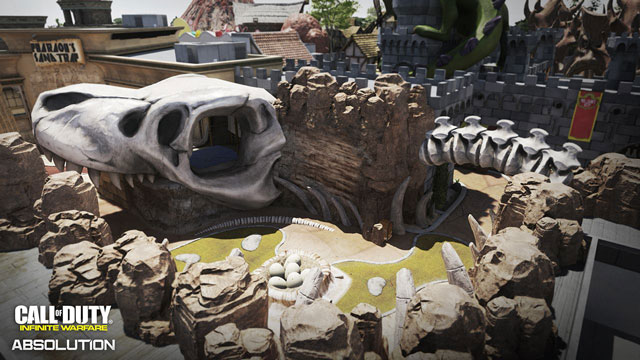 This is the fourth zombie-themed map in the game. It is inspired by 1950’s-era monster movies. The players will be put in a place in Sanova Beach, a fictional place in California. It once again features movie director Willard Wyler. He has trapped the four protagonists on the set of his movie. The government science experiment has transformed the residents of the beach town into zombies. Horror movie icon Elvira will try to help players survive with tips and side quests, as they gain new weapons, fight bosses and more.

Thew new DLC brings new maps, as was announced on the official site. This time around, the players will be free to roam the following maps:

Due to Activision’s timed-exclusivity deal with Sony, Call of Duty: Infinite Warfare third DLC Absolution Pack comes out on PlayStation 4 first, on July 6. Xbox One and PC players will have to wait one month longer to get their hands on this pack. The DLC is included in the $50 season pass, but it can also be bought separately for $15.