If changing clothes doesn’t work in Disney Dreamlight Valley and you can’t complete the Scrooge McDuck t-shirt quest, we have a possible fix. Disney’s Animal Crossing-like adventure offers a unique life-sim experience where players explore different realms of famous Disney and Pixar characters. You will be asked to complete various friendship quests for them. However, one quest for Scrooge McDuck requires you to switch to another t-shirt, but the clothes choice doesn’t stick. In this guide, we offer a few possible solutions to fix this Disney Dreamlight Valley changing clothes bug. 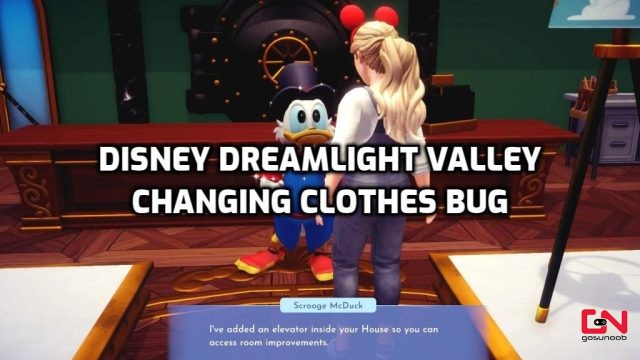 As we’ve already mentioned, Disney Dreamlight Valley is now available in early access. Unfortunately, this often means unavoidable bugs and glitches, as that’s the purpose of EA, to catch and stamp out issues. One critical bug is currently causing players to not be able to progress a certain quest. Namely, a certain quest for Scrooge can’t be completed because of this bug. He gives you a t-shirt to put on, but you can’t do that, as the clothes don’t stick.

While this is a bug, there are a few reported workarounds which you can use until it’s fixed. One player reports that not wearing a jacket is a possible solution. For this, just go to your wardrobe and uncheck the coat. There’s even an official response from developers, that goes by the name “rachel.GL” on Steam forums. Here’s what they say is the solution:

“Before attempting to change your shirt into the Scrooge quest one, make sure to unequip any full-body clothing (Dresses, overalls, etc.) and remove any Jackets/Sweaters that may cover it up,” rachel.GL wrote. However, keep in mind that this solution doesn’t work for some players, while it has solved the issue for others. It’s it definitely not 100% workable, but that’s what we currently have.

Nonetheless, Steam user CoolMoon proposed another solution which supposedly fixes the issue. According to them, swapping your gender will allow you to equip the shirt and do the first Scrooge McDuck quest. After you finish the quest, you can switch back and get your original character back. If neither of these solutions works for you, then, unfortunately, you’ll have to wait for the developers to fix the bug.