Looking for all NBA 2K23 MyTeam Season 1 rewards? You’ve come to the right place! The NBA 2K23 launch day is here, and with it, MyTeam Season 1 officially kicks off! Without a doubt, MyTeam is by far the most popular mode in NBA 2K games, something players happily grind for every year in order to make their dream team. While a painstaking process, which often requires you to part ways with your hard-earned cash, there are also some things which will help you on that journey. Such as NBA 2K23 Locker Codes and seasonal rewards. In this guide, you’ll find all MyTeam Season 1 rewards, including free packs, players, tokens, and more. 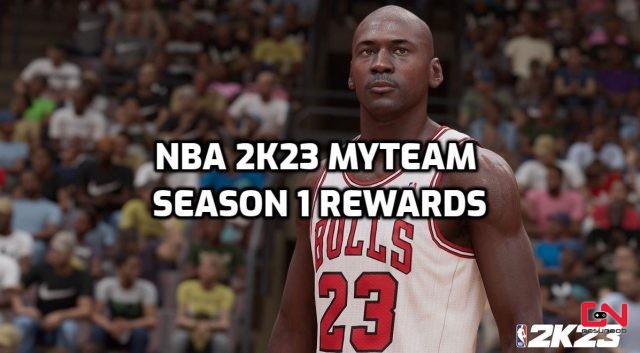 Earning and buying players in MyTeam is long and toiling work, which requires time and energy. However, this can be offset with money. A lot of money if you are ready to spend your cash on packs. However, if you are not exactly thrilled at the prospect of throwing away your money, MyTeam Season 1 rewards are here to help you a bit. The rewards for the first season have now been revealed, and we have them for all levels. From level 1 to level 40. The legendary Michael Jordan is the star of this year’s NBA 2K game. Thus, the focus in the first season is on him and his teammates from the mid-90s Chicago Bulls roster. Without further ado, let’s jump right to the Season 1 rewards: