Nintendo has recently unveiled their new Switch console – the Switch OLED. Fans have long been speculating about what’s next in store for the Nintendo Switch, and while many have been hoping for a 4K Switch model, this isn’t the case – at least not yet. OLED, short for organic light emitting diode display, is, of course, the main reason to get this. Unlike an LCD screen, it doesn’t use a backlight, but rather the light displayed by each individual pixel. The end result is that you get “true blacks” and much better image contrast levels. The screen is also bigger now, increased to 7 inches. 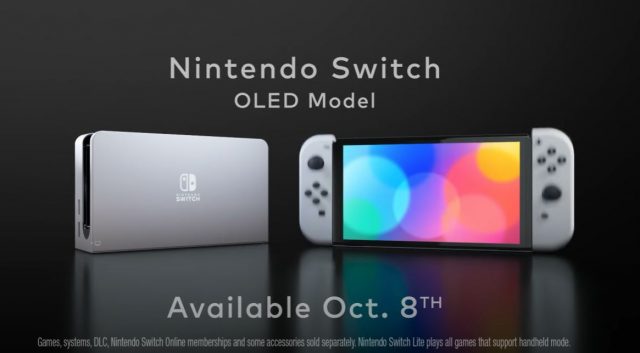 When is the Nintendo Switch OLED Set To Release

The release date for the Nintendo Switch OLED is October 8, 2021. It will cost $349.99, $50 more than the standard model. As you will see in the trailer we’ve linked down below, Metroid Dread was prominently featured in the video. The increased size and better picture quality will no doubt help a lot when it comes to playing this fast-paced game. The OLED model also has a wide adjustable stand. With this, it will be even easier to place your Switch and play at an angle that suits you. Up next on the list of enhancments is the enhanced audio. Wired LAN support also guarantees that extra dose of stability when you are playing online games. Likewise, the internal storage is now increased to 64GB (compared to 32GB on the standard model), so you will be able to fit even more games on it now. Here are all the technical specifications: