When is Lionel Messi coming to PUBG Mobile? PUBG Mobile developer Krafton has just announced one of the biggest collaborations in the history of video games. Lionel Messi, the Argentinian football legend, is set to arrive in the popular battle royale game as a part of the Version 2.3 update later this year. The collaboration with the former FC Barcelona star will bring many cosmetics and other surprises to PUBG Mobile, and fans can’t wait for this collab to kick off. If you are among them as well, here’s what we know about PUBG Mobile x Lionel Messi collab release date. 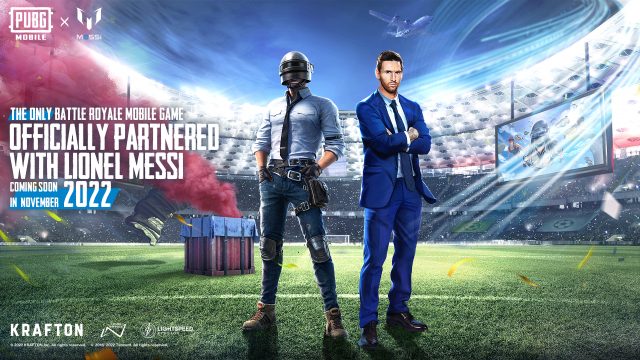 So, when is Paris Saint-Germain’s superstar coming to PUBG Mobile? Well, the collaboration has just been announced. And the exact date when will Messi be added to the game hasn’t yet been revealed. However, we do know that the Messi event will be added as a part of the PUBG Mobile 2.3 update. The update itself doesn’t yet have an official release date. Nonetheless, based on the current schedule and rhythm of releases, our educated guess is that the upcoming 2.3 update will likely launch on November 16th, 2022. Consequently, November 16th is the date when we believe Messi will be added to PUBG Mobile.

At the moment, Krafton hasn’t yet revealed any content they will add to the game as a part of the collab. However, we expect outfits and other cosmetic items themed around Messi to be added. We do know that there will be a new Football Carnival Mode. That’s definitely connected with this collaboration. Here’s what Messi had to say about this collaboration:

“Video games have always been a huge part of my life. I find them incredibly helpful to relax and enjoy myself when I’m not training, and to connect with my teammates, friends, and family,” Messi stated via press release. “PUBG Mobile is so much fun, and I am personally amongst its millions of fans all over the world. I am proud of what we’ve been working on and want to invite all players to join me in PUBG Mobile.”

It is interesting to note that Messi’s biggest rival, Cristiano Ronaldo, has previously collaborated with Free Fire. Free Fire is another battle royale game and PUBG Mobile’s biggest competitor. For now, that’s all we know about the PUBG Mobile x Lionel Messi collaboration. Nonetheless, we will make sure to update the article as soon as Krafton share more details in the near future.

World of Warcraft: Dragonflight is the latest expansion to the hit MMORPG. Like previous expansion…

The Season 6 battle pass Week 2 quests for Brawlhalla have been released, and one…