Slay the Spire has always been a number-cruncher’s game. There’s an element of luck involved, but having a good, clear plan and tirelessly working towards it, knowing how different cards and relics fit into it, is the only route to victory. Although I immensely enjoy playing it, it makes me feel dumb as a doorknob more often than I’d like to admit, and that has never been more the case than with the Watcher.

The Watcher is a new character; it was introduced into the beta branch some months ago and only became part of the game proper a couple of weeks back. As the others before, the Watcher requires a unique approach, fueled by a bunch of systems that were designed specifically for her. She can see into the future, use several different stances, keep cards between turns and refuel her energy using special cards. She also has the uncanny ability to make me feel like I’m a brick trying to do advanced calculus.

The core of her style are the three stances – calm, wrath and divinity – and switching between them. Calm doesn’t do anything by itself, but you get additional energy when leaving it. Wrath makes you do and receive double damage. Divinity triples your damage and gives you more energy, but lasts just one turn and can only be entered by accruing mantra points.

It looks simple enough – use wrath to do damage, preface it with calm so you have more energy to deal damage with, all the while slowly farming mantra points for the grand finale. But things tend to get messy easily: you miscalculate, you misclick, you draw the wrong cards, and now you’re stuck at the end of your turn with no way to turn off wrath, staring a ridiculous amount of incoming damage in the face. 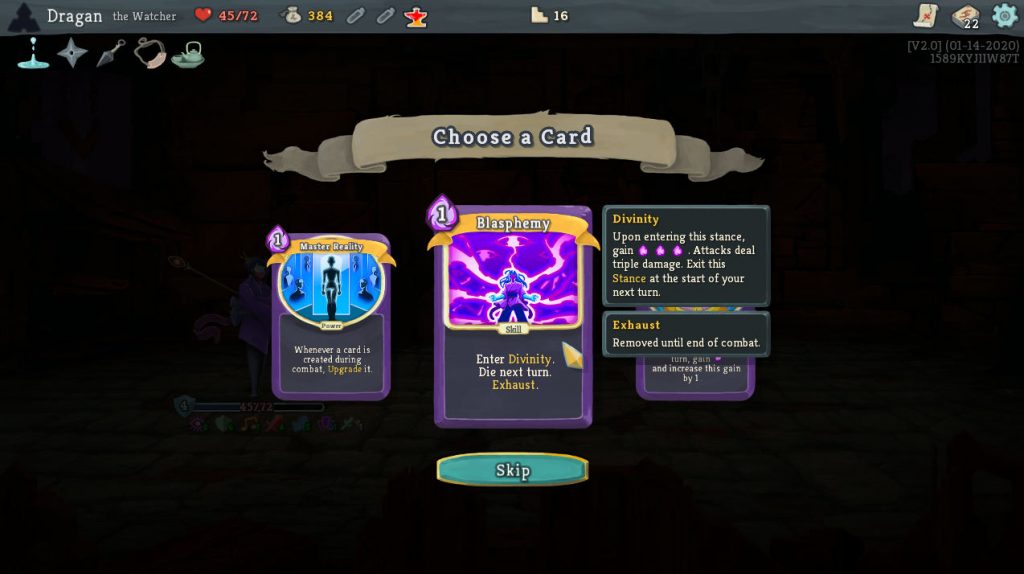 Ah, but she also has a bunch of cards with the Scry trait – these allow you to look at the top X cards from the draw pile, then discard the ones you don’t want in your next hand. Seeing how fiddly things become, and how quickly, scrying seems like it’s a must.

But your ability to draw is limited by cards with the Retain trait. They stay in your hand after you’ve ended the turn, allowing you to keep an nice, hefty attack or a last-chance defense for a rainy day, but they also clog your hand. Soon enough, you’re keeping a miracle, a cheap and effective block, an attack that keeps getting stronger the longer you keep it, stance change cards and a bunch of other stuff. Before you know it, there’s no room to draw.

And there are dozens of crazy synergies with MUST HAVE written all over them in bold red letters, as well as insanely powerful one-off cards that seem like they’re too good to be true (they are). But you also have to keep your deck from bloating, now more than ever. No matter what kind of deck you choose to pursue, keeping it trim is the number one priority for the Watcher. In every run, you need to make up your mind about what you want as soon as possible, then keep working towards that no matter what fun diversions the game might offer – and they will be fun. 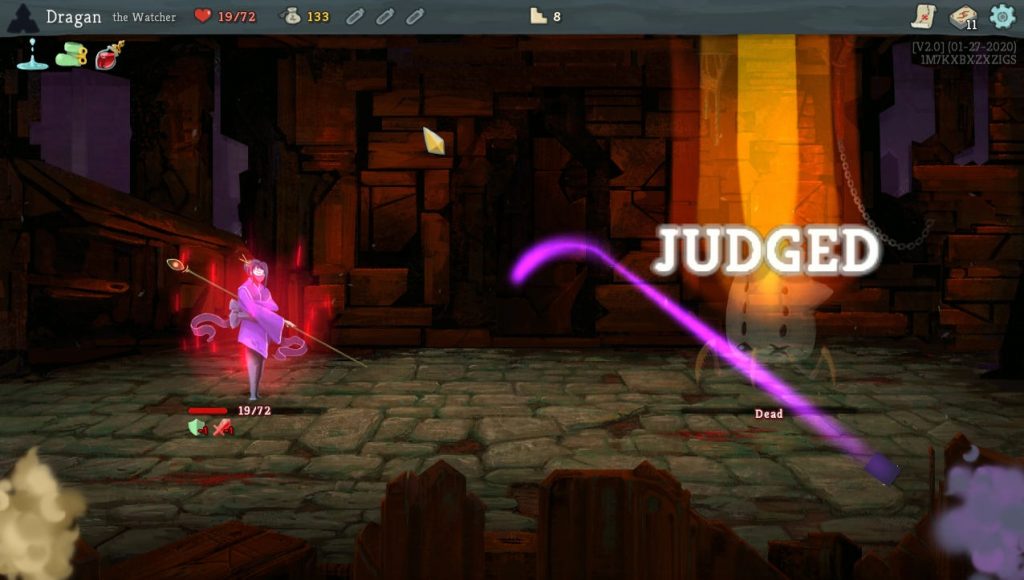 In essence, being good at playing this new character is all about deliberate action, keeping things under control and denying Lady Luck her due whenever possible, which are all things I’m patently incapable of. It’s a far cry from the care-free experience you get from the Ironclad or the Silent, but the success is also considerably sweeter. At least it was that one time when I managed to reach the end despite myself.