Blizzard has finally shared more details about Overwatch 2’s first new hero, Sojourn. The former member of the Canadian Special Forces has joined Overwatch during the organisation’s most glorious days before its disbandment. In terms of gameplay, Sojourn offers a rather unique kit. She has aggressive abilities which allow her to control the battleground and inflict a high amount of damage. Read on to learn about Sojourn’s abilities, primary and secondary fire, ultimate, gameplay, class, and more. 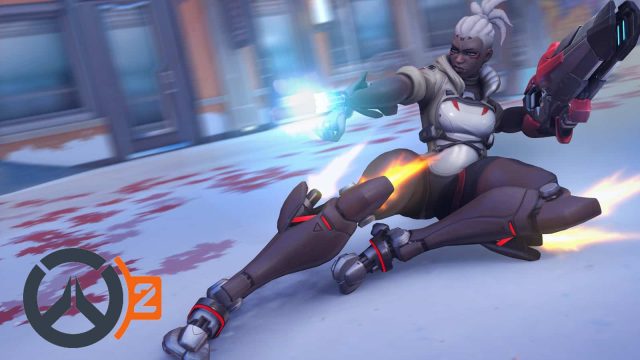 Sojourn is a Damage hero with a crowd-control ability which makes her a great hero to plan out the attack and engage. Her kit is built for mid-range encounters and rewards accuracy. Her mobility will allow you to approach your targets, deal continuous damage with her Primary fire, and quickly charge up your Secondary. Unlike most other damage heroes, which typically have either projectile or hitscan weapons, Sojourn utilizes both.

Sojourn’s weapon, Railgun, has two modes of fire. Her Primary fires projectiles, and it’s best utilized in mid-range combat. The more you hit with your Primary, the quicker you charge up your Secondary. Her Secondary is a high-damage single shot that obliterates anything that hits. As we can see, railgun rewards skilled players who are able to continuously hit their targets. And that’s the most efficient way to recharge Secondary quickly, thus dealing even more damage.

Her Disruptor Shot is designed to help you in this regard. It is an AOE ability that slows targets caught inside it, thus allowing you to hit them more easily. Charge up your Secondary, ensnare enemies in Disruptor Shot AOE, and annihilate them with the Railgun blast.

As we’ve already mentioned, Sojourn is a mid-range hero. And the Power Slide ability is a perfect tool to easily engage and disengage. Slide into the fray or reposition yourself for a better Railgun shot. Slide towards the enemies and then use the high jump ability to shoot at them from above. The possibilities are endless. Check out all Overwatch 2 Sojourn abilities, as well as Sojourn’s gameplay in action in the official video below. What are your thoughts about the new Overwatch hero? Share your impressions in the comment section!