Now that Pokemon Legends: Arceus is out, players are eager to begin their adventures in this exciting new open-world game. But before you can do that, you will be faced with a very important and difficult choice. We’re talking about, of course, which starter Pokemon to pick. You will be given a choice of selecting Rowlet, Cyndaquil, or Oshawott. All very good picks, but you can only get one of them. So, to help you make the right choice for you, in this Best Starter Pokemon, Rowlet, Cyndaquil, Oshawott in Pokemon Legends Arceus guide, we will be going over all three of these and discussing which one is the best, overall. 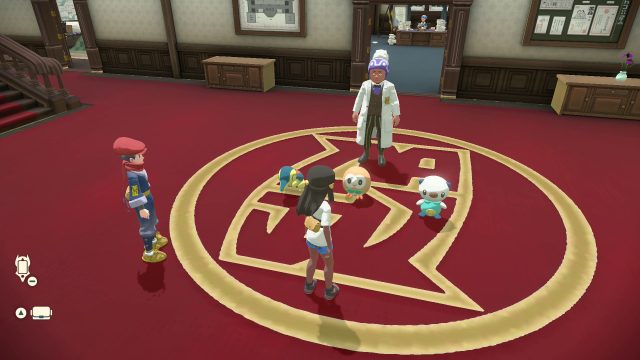 Rowlet, Cyndaquil, and Oshawott are all pretty different from one another. There are no wrong choices here – you won’t be, for example, locked out of some content or have trouble defeating certain opponents because of your starting choice. After all, it’s simply the first Pokemon that you will get, and you will acquire many more during the course of the game. So, an important consideration here is what sort of Pokemon types do you usually go for, as well as esthetic considerations.

Cyndaquil is a Fire Pokemon. It can evolve into Quilava, which then evolves into Typhlosion. There are plenty of other Fire-type Pokemon in the game, so Cyndaquil, adorable as it is, wouldn’t be our recommendation here. Next up, Oshawott. A Water-type, it evolves into Dewott, followed by Samurott. Again, a good enough choice.

However, out of all of these, our vote would have to go to Rowlet. This is because Rowlet is a Grass/Flying dual-type, making it more effective against a greater range of enemies. Even better, after evolving into Dartrix, it can then evolve into Decidueye – which is a very powerful Grass/Ghost ranged attacker.

PREVIOUS POSTHow to Get Starter Pokemon in Pokemon Legends Arceus

NEXT POSTCherrim Location, To Bloom Or Not To Bloom Pokemon Legends Arceus