Pokemon Scarlet and Violet is a new Pokemon game that has been announced for an end-of-year release. While we still don’t know all of the details about it, it looks like it’s going to be similar to Pokemon Legends: Arceus. That is, played from a third-person perspective and with a big open world to explore. And, like in Arceus, you will also be faced with a very important choice right at the start of the game. Namely, which Pokemon is going to be your starter. You will have a choice between three of these: Fuecoco, Sprigatito, and Quaxly. Since all of these have been invented specifically for the game, it can be very tough to know which to select. In this guide, we are going to tell you everything we know about Fuecoco, Sprigatito, and Quaxly, so that you can choose the best starter in Pokemon Scarlet and Violet. 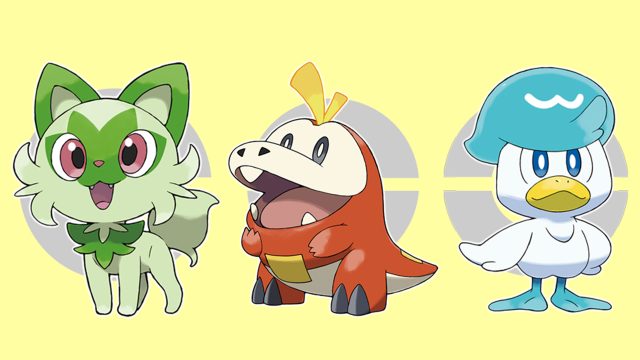 Fuecoco is a Fire-type Pokemon. Its description states: “The laid-back Fire Croc Pokemon that does things at its own pace.” Fuecoco’s height is 1’4″, its weight is 21.6 lbs., and it has the Blaze ability. Fire types are usually a good starting pick, so this could very well be the best Pokemon to start with.

Sprigatito is a Grass-type Pokemon. The in-game description for this Pokemon describes it as: “The capricious, attention-seeking Grass Cat Pokemon.” This green cat-like Pokemon’s height is 1’4″, it weighs 9 lbs., and it comes with the Overgrow ability. Sprigatito looks to be an excellent choice if you like Grass Pokemon.

A Water-type Pokemon, Quaxly is described as: “The earnest and tidy Duckling Pokémon.” Looking like a cute blue duckling, Quaxly is 1’8″ tall, weighs 13.4 lbs., and it possesses the Torrent ability. Again, like the previous two choices, picking Quaxly is unlikely to have any major ramifications on the game. Also, you will almost certainly be able to get the other two starter Pokemon soon.