Type: Null is a legendary pokemon you can catch in Pokemon Sword & Shield. It’s a synthetic pokemon, a hodge-podge of parts that have no place being mashed together. It starts off as a normal type, but once it evolves, you’ll be able to change its type by giving it certain items. If you’re wondering how to obtain one for yourself, this guide will show you how to get Type: Null in Pokemon Sword & Shield.

How to get Type: Null

Same as all the other legendary pokemon in this game, the Type: Null is impossible to miss. You can get it after you’ve completed the story. Go to the Battle Tower in Wyndon and head left from the reception. You’ll see a trainer with a strange pokemon standing there. Talk to her and she’ll gift you the Type: Null.

It’s nothing special by itself – a normal type pokemon with some cool moves. But if you increase its friendship enough, it’ll evolve into Silvally. That one looks a bit more impressive, but it’s still not all that. The really cool part is that you can change Silvally’s type into whatever you want. All you need to do is give it memories. These shiny disks are a gift you’ll also from the trainer who gives you Type: Null. Each of them will change its type into something else, and you’ll be able to swap them between battles, effectively having a pokemon that can rise to almost any challenge. 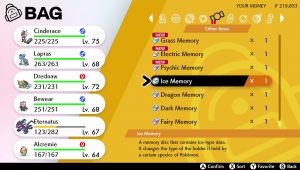 If you’re having trouble getting any of the other legendary pokemon, we’ve also written guides to help you catch both Zacian or Zamazenta and Eternatus. It’s sad that you can only get one of the wolves, depending on your game version, but you can try to trade for the other.