One of the finest rogue-lite games in history is a pretty tough act to follow. How, exactly, could you top Darkest Dungeon? By making it more sinister? It was menacing as sin already. Adding more biomes/bosses and updating the bestiary? Fans expect more than that. Uhm, maybe by redefining some basic concepts and streamlining the game?

They went with the last one. For me, streamlining is a dirty word when used to describe sequels to the beloved hard-core games as it always means compromise, introduced to broaden the audience. Compare, for example, the brilliance of Everspace and the dreary, boring accessibility of Everspace 2. Compare it and weep.

Red Hook Studios streamlined the flow of the game. They got rid of the base camp and management of dozens of adventurers, focusing instead on a particular group you pick at the beginning. The difficulty is still brutal, but the “economy” aspect and the long campaign are gone. Well, the economy is not entirely gone, but instead of worrying about well-being, stress, trinkets, and combat upgrades for 40+ people, you only need to cater to the needs of four. 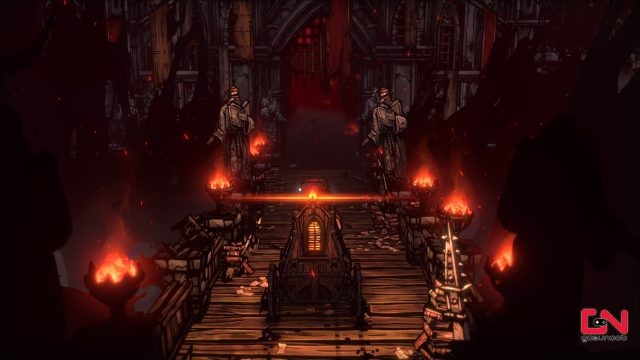 Your base is now mobile. Traveling in a stagecoach, your band of adventurers will cross dangerous terrain, putrid wilderness, and burning cities, trying to reach the mysterious mountain. The evil that your ancestor dug up from beneath your family estate had spread around the world, and the only hope for salvation lies in bringing the torch of hope to the root of the problem.

You will rest and recuperate in roadside inns, using consumables to heal, reduce stress and invest hard-earned mastery points in skills of your choosing. Then you’ll press on, picking the next biome to cross, driving your wagon ever forward. In every biome, there are multiple routes that you can choose at crossroads. One could lead to tactical confrontations, the other to trinket/consumables vendor, third to a field hospital, fourth to watchtower that you can use to scout ahead and reveal the mystery nodes, etc. 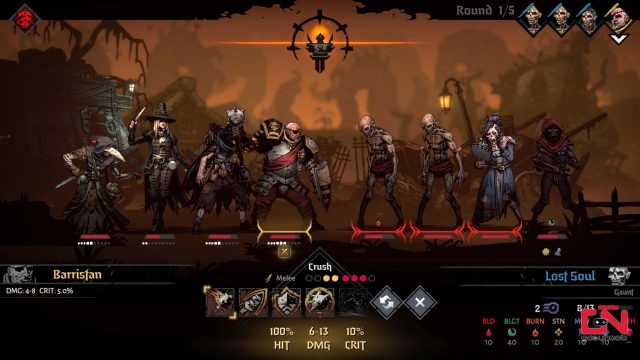 Once committed to one biome, there is no turning back. You will reach the next inn, or you will die trying. Darkest Dungeon was more nuanced compared to this binarity of outcomes, offering the option to abandon run, adding to the stress but preserving the lives of adventurers. Now, it’s do or die, and I don’t like it very much. When you die, and you will inevitably die, Hope, the XP-like currency you had collected in the run, is added to your account level. This meta progression unlocks new classes, giving you more starting options than four default adventures. Higher levels also unlock better potential loot, wagon upgrades, etc.

Early Access version of Darkest Dungeon 2 currently offers only the first of six chapters. Initial heroes are Plague Doctor, Grave Robber, Highwayman, and Man-at-Arms. Leveling up unlocks Hellion, Jester, Leper, Occultist, and Runaway. The last one is a singular new class in this early build. Runaway is a debuffer with burning DoT, the ability to hide from harm and bring stealth enemies to the light, among other things. I haven’t found it particularly useful compared to Highwayman or Hellion, which compete for its tactical slot. You can’t use multiple heroes of the same type in the party like in the first game. 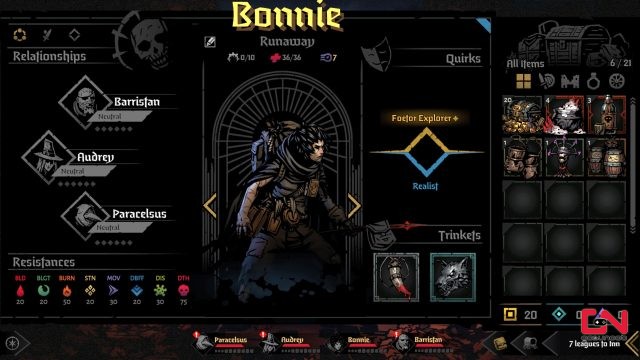 Tactical combat is mostly the same, apart from nice 3D models instead of 2D papercuts of heroes and monsters. Instead of their custom engine, Red Hook Studios opted for Unity, which enabled them to reach a whole new level of polish. The best new thing is the idle animations, sways, and swings that enliven each scene. Heroes now have preparatory stances, triggered when you select the ability. It looks incredible and positively sinister.

A great new addition is the origin story for each member of your suicide squad. It manifests itself as a tactical node you’ll stumble upon (or not) during the drive, and upon completing each chapter, you’ll unlock a cool new ability. Bonnie the Runaway is, well, runaway from the strict religious convent – her story begins with a tactical fight with the sadistic mother superior. Pickpocket three keys from her while hiding from her whip, and you can put all those nights kneeling on corn behind you. Those stories help with achieving a tighter focus on a single group of heroes. 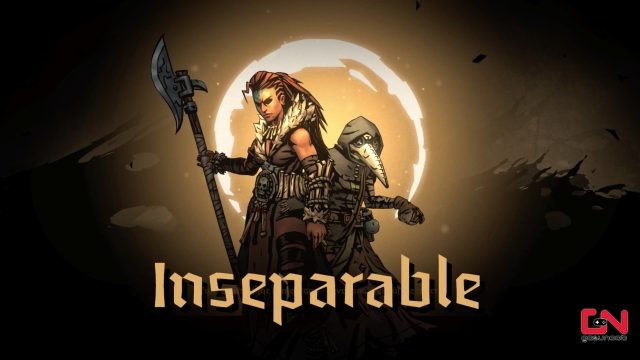 Speaking of tighter focus, relations between team members are deepened through a system of affinity and animosity. It’s currently random, triggering feelings that are mostly unrelated to anything. For some reason, one hero will start to like or dislike another, deepening that relationship as the adventure goes on. Higher levels of hatred are detrimental, interrupting the tactical combat and often preventing some abilities. In one game, I had Man-at-Arms and Plague doctor hating each other guts; it escalated to the level where Man-at-Arms repeatedly refused to be healed by Doctor Paracelsus, suspecting the sinister plot of his.

Stress accumulates faster than before, and after reaching the threshold, a hero will suffer a meltdown, lowering HP and resetting the relationships to some extent. That reset is also random and non-transparent, further putting the success of your run in the hands of cruel RNG. Don’t get me wrong, you had plenty of RNG in Darkest Dungeon, but triggers and outcomes were more logical. 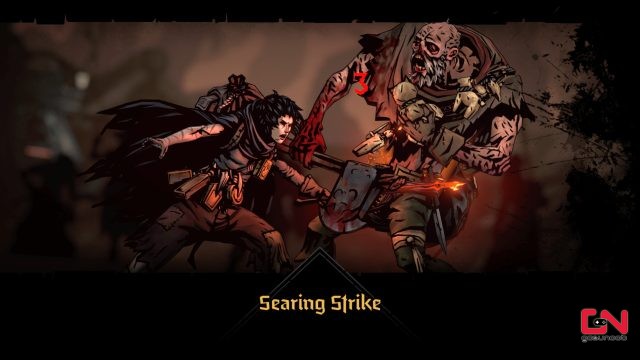 I’m not sure that I like this new direction for the Darkest Dungeon franchise. The first game was a grand high-stakes affair, the one in which you could get irreparably fucked after investing 30 hours into one attempt. I kind of liked the perpetual giga-dread it induced. It offered a precious, naked link between the skill and outcome, risk and reward, luck and misfortune. I had dreams about it. I even contemplated a tattoo (don’t ask).

In Darkest Dungeon 2, you gamble a few hours, at most. You won’t feel like part of an epic, perilous adventure. The next try is always one click away, and meta progression means that even a failed run counts for something. I realize that for some, this point of view might sound like bullshit ramble from some fetishist hooked on pain. True Darkest Dungeon fans, though, will understand.

I have only two perfect games in my Steam library, FTL and Darkest Dungeon. I sincerely doubt that Darkest Dungeon 2 will be the third. Not unless Red Hook reinvents the wheel again.

NEXT POSTGet Happiny & Evolve Into Chansey and Blissey Pokemon BDSP