Old school shooters have been going through a renaissance these past few years. Even the big boys have taken notice, thanks to which we now have Quake Champions, uppercase Doom and a new Unreal Tournament. On the other side of the spectrum are indies – indies like David Szymanski and No Blood Interactive, who have released their retro FPS Dusk onto Steam Early Access a few days ago. We sent our best man (that’s me) to investigate.

If you’ve played any of Szymanski’s previous games, you’ve probably come to associate his name with a certain kind of narrative experience. There’s none of that here. Dusk is as blunt as possible, only giving you the first piece of explicit story after you’ve finished episode one. When you hit play, you’ll end up in a room with a pair of sickles and three angry men with chainsaws. In truth, it’s all the introduction you need. Even when it decided to treat me to some explanations, I was eagerly punching away at the keys to make the next episode start.

The single player campaign consists of three episodes, two of which are available in the early access version. The first thing I noticed when I fired them up was how fast the main character was. The player’s movement speed is insane – it might just be me, but Quake seems like a trek through the mud compared to this. It’s so fast I was a bit uncomfortable at first. Thankfully, the game lets you walk at a normal pace by holding Shift, which is a great crutch for getting accustomed to zooming about.

There’s not much variety to the enemies, but every room of every map feels like a handmade challenge. The layout of the room, how enemies are placed, which weapons you have at your disposal – it feels like everything was accounted for and planned out beforehand, and each one is a miniature murder-fest puzzle. Granted, you’ll solve all of them by spraying giblets across the walls, but still.

The arsenal at your disposal isn’t by any means unique or outlandish – it’s the same 10 guns we’ve been using for a few decades now – but all of them have a unique feel. The sounds and the delightfully low-fi effects make them quite memorable. The crunch of the double-barrelled shotgun, coupled with the smoke and shells flying as you reload. The thump of the mortar as you launch a grenade into a crowd of enemies, and the trail of smoke and dust it leaves behind. The sound of the hunter’s rifle being reloaded painfully slowly after you’ve missed a vital shot.

One of the unexpected things Dusk does brilliantly are moments of respite. The maps are littered with places where you can stop, look around and soak up the atmosphere. The game even lets you light a cigar while you’re at it – a little bit of serenity to lower the pulse after a gunfight. In keeping with the rest of Szymanski’s body of work, many of these places are permeated by an air of melancholy. They’re sad, abandoned or misappropriated spaces. A defiled church alone on a hillock. A floating temple-turned-lab, whose ancient spires mask grimy smokestacks.

It took me about three and a half hours to go through the two episode currently on offer, both on normal difficulty. They felt hefty, especially the second one. They’re obviously meant to be replayed, like in the days of yore. Each level is scored according to the number of kills and secrets, as well as the time it took you to beat it. Once you’ve cranked up the difficulty, you can also choose to let the game disable saving and start each map off with nothing but your melee weapon. There’s a lot to experience here, if you don’t mind the repetitive nature of it.

The horde mode feels perfunctory. It works, it can be fun for a round or two, but there simply wasn’t any lasting appeal for me there. It might’ve been the layouts of the arenas, or the availability of weapons and ammo – it wasn’t easy, but it wasn’t satisfying either. Your mileage may vary. 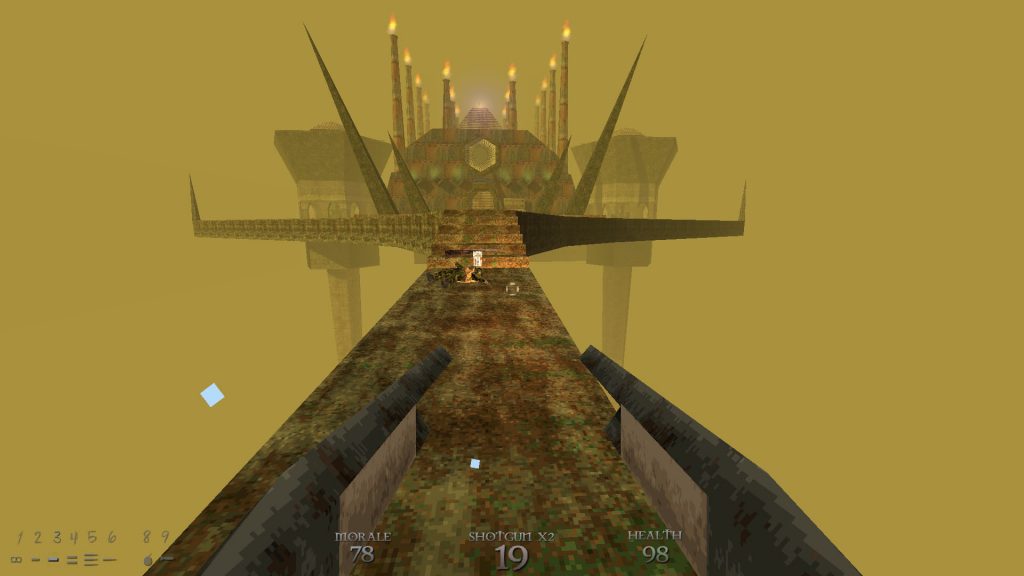 Finally, there’s the multiplayer. It’s an early beta, but I found it completely unlikeable. The movement speed was the biggest issue – this time, it wasn’t just me running at breakneck speeds, it was 10 or so other people as well. And we were all trying to shoot each other. It felt like everyone was just blindly firing towards where they thought others were, occasionally hitting something other than scenery.

If it’s a multiplayer shooter you’re looking for, I’d suggest you steer clear of Dusk, at least in its current state. However, if you’re looking for a memorable singleplayer romp, the kind that will remind you of when you first set foot on Phobos, then you’re in luck. Dusk oozes charm, and although it pays homage to what came before it, it’s confident enough to also do its own thing.

Copy of the game provided for review by the developers.

NEXT POSTNew PlayStation 4 System Software Update Beta up for Signups