Putting the failures like Evolve aside, most asymmetric multiplayer action games present a long-term success story. Years after release, Left4Dead 1 and 2, Dead by Daylight, and Friday the 13th: The Game still attract a significant number of players every day.

The major downside of all those titles is that none star Bruce Campbell. Not a single one but Evil Dead: The Game. In this 4 vs. 1 multiplayer game, the big groovy guy is reprising his iconic role of Ash Williams, helping his fellow survivors stop the demonic invasion. Four people need to complete a specific set of tasks in a classic backdrop of haunted woods and murky countryside, avoiding traps and machinations of a Kandarian demon player. The game offers permanent progression, various classes with different bonuses, unlockable characters, color-coded tiered loot, etc. You can also play with bots in multiple setups, and there are even single missions that unlock lore, characters, and cosmetics.

Survivor gameplay is defined by a series of specific victory conditions. The first order of business is to search for three pieces of a map pinpointing the location of the Kandarian dagger and lost pages of Necronomicon. After securing all of those while dealing with the waves of Deadtites, there’s a showdown with the Old Ones and the two-minute frantic protection of assembled Necronomicon. If you are a fan of the source material, you are probably salivating by now. 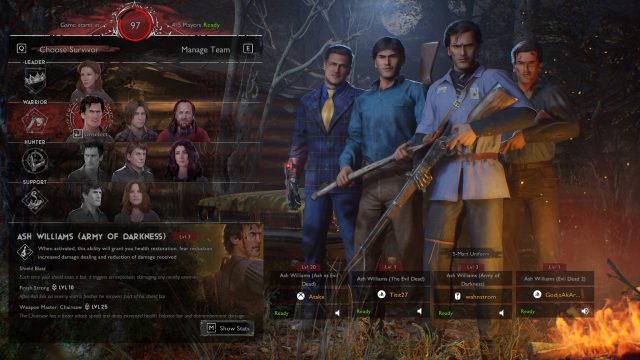 The potential problem with multiplayer matchmaking could be everyone’s natural desire to play as Ash Williams. Any fans of Henry the Red, Duke of Shale, Lord of The Northlands, and the leader of its peoples here? Or any forgettable sidekick from Ash VS Evil Dead cast? Yeah, I thought so. Luckily, the devs multiplied Bruce Campbell cleverly and logically, implementing four different versions of him.

Every class features its own Ash Williams, one for each main movie and TV show. Warrior class, for example, features Ash from Army of Darkness, with a famously torn-up shirt and leather harness. Naturally, the Leader Ash is the oldest Ash from the TV series. During my playtime, all-Ash matches were pretty common initially, but players gradually warmed up to other survivors.

Some players will prefer to play as Kandarian demon, which is, arguably, a more engaging way to experience the game. Demon is fast, invisible, and able to create all sorts of deadly mischief for the survivors. It can spawn Deadites, booby trap loot boxes, and possess trees, cars, and even other players when their fear level reaches maximum. Demons also come in several class/type varieties, specializing in a different nightmarish categories. Puppeteer demon, for example, enjoys various benefits when possessing people.

It took Linda, then it came after me 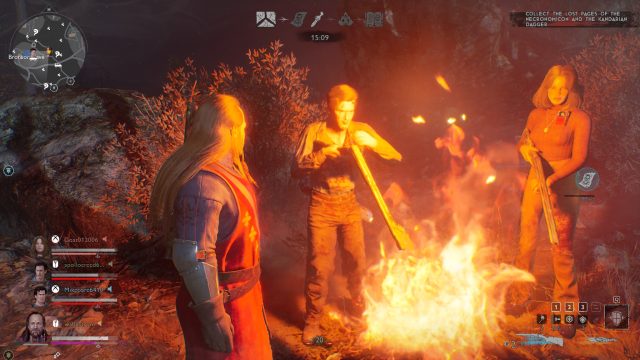 Survivor fear is the essential mechanic. It diminishes when moving in a group or standing near a light source such as a bonfire or torch. It rises slowly on its own when survivors don’t stick together and even more rapidly when a demon pranks them, say, by spooking them with a possessed evil tree. Leaders have an aura that slows down fear buildup, and some classes have special abilities that clear it (on cooldown). A survivor whose fear bar fills up is always traceable for the demon and becomes ripe for the possession.

Others can free snatched individuals by attacking them, which is one more reason for working near one another. When demon player possesses isolated survivor, it often significantly derails them by wasting their ammo or moving them in a random direction, further separating them. Demon also levels up during the match, and the fear it generates rises with its progress.

Loss of control is frustrating, but it’s sadly unavoidable when playing with randoms. In most cases, people will spread around at the beginning in the search for weapons, consumables, and pieces of the map. This will become a problem if they fail to congregate in the second phase, especially if someone initiates Deadite waves trying to get a dagger and pieces of Necronomicon. Demon player who knows the drill will exploit the lack of cohesion, picking isolated stragglers. Sometimes, you’ll get lucky, finding the people who know what they are doing, and those games will be fun. But, in most situations, you’ll suffer the group of unherdable cats. 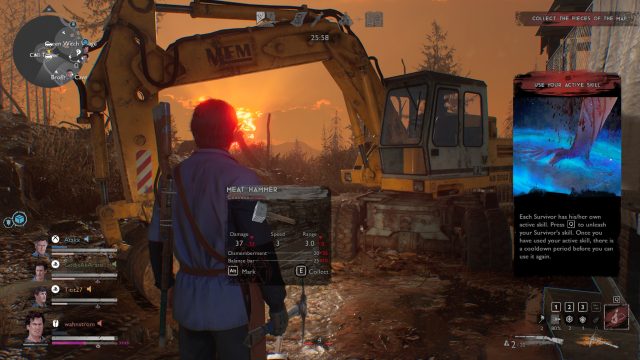 The main issue with Evil Dead: The Game is the single set of victory conditions for the survivors. They must always follow a singular path and conclude the match in a specific way (or die trying). Get 3x map piece -> get Kandarian dagger and pages of the Necronomicon –> kill the Old Ones –> protect the Necronomicon for two minutes. The locations of the objectives are randomized in every match, but that’s the full extent of the diversity of the experience.

In Friday the 13th: The Game, for example, survivors could attempt to kill Jason, call the police or escape from the map, etc. They often make those decisions depending on the success or failure of attempted steps, creating an unpredictable dynamic. Here, “unpredictability” is a synonym for people screwing up, walking into the woods alone, or being generally thick. In the best-case scenario, when you play with competent people, Evil Dead will offer the same experience every time. In the worst case, it will always be a frustrating clusterfuck. Every victory will look and feel the same, but every defeat will be unique. There’s a Leo Tolstoy quote here somewhere. 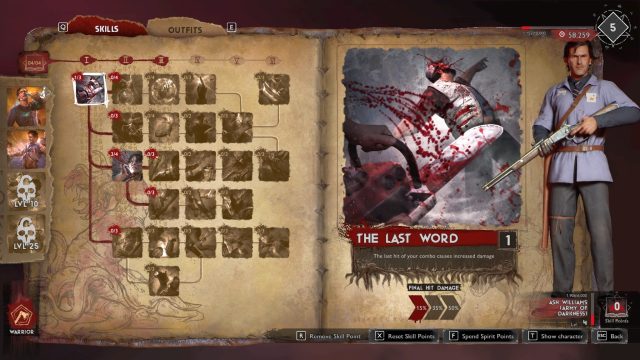 Lack of variety is the major problem for the survivor side, but not for the bad guy. Kandarian demon players mostly create their own fun by exploiting the mistakes of others, and that can keep them glued to the game for a long time. Matchmaking will run smoothly in the first few weeks after launch when the player numbers are high. But common sense says that people will quickly experience everything that survivors offer. After they get bored, they will either switch to Mr. Kandarian or stop playing altogether. What happens then? One demon player for every squad of four survivors means it will, in theory, take those players four times longer to matchmake. The build-in crossplay between platforms will offset that problem for some time, but surely not forever.

Evil Dead: The Game enjoys star power like no other similar game, but I doubt that will be enough. In the long run, the staying power of every online game is fortified with novelty, and that’s in limited supply here. The game desperately needs to broaden the survivor experience, or the people will inevitably leave.

NEXT POSTRed Chest Locations in Borderlands 3