The second half of the 1990s saw the emergence of sampler software on PCs and, for the first time, things that were only possible with professional studio equipment could be done in the comfort of our homes. I spent a few sweet months playing around, creating samples, and making my own mixes during that period. I look back very fondly on my days of taking a beat from one song and adding in flavor from other artists, creating something I felt was new and unique. 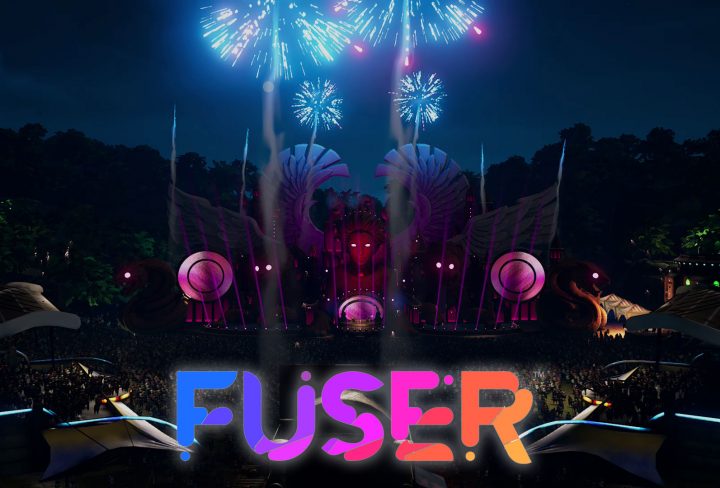 Fast forward to 2020. Music is omnipresent and easily available through the magic of the internet. Most of the songs made today are crafted by using software whose roots are in those samplers I used twenty-odd years ago. The line between a music creator and expert software user is blurred to the point of non-existence. Existing software tools can make even amateurs into hit makers, while auto tune has made tone-deaf people into singers.

Enter HARMONIX, the makers of Rock Band and the most successful creators of music and rhythm-based video games. They have been converting performing hits into gaming for decades, and doing a bang-up job. But how do you appeal to the new generations? You can’t take a plastic guitar controller and perform Billie Eilish songs. Trap would look ridiculous with plastic turntables.

Thus, we get FUSER, the title that is supposed to bring the rhythm video game genre into the 2020s. You assume a role of an up-and-coming modern performer. This means that you are on the stage with your laptop, mixing samples from popular songs into something new and hopefully exciting. FUSER basically puts you in the role of someone like David Guetta, Marshmello, or Skrillex. 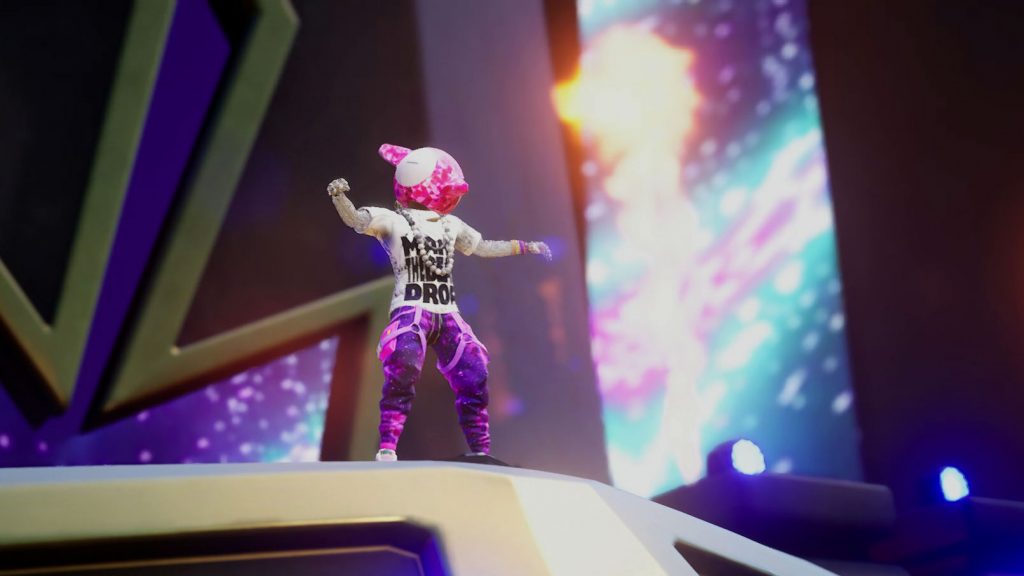 Your FUSER experience starts with a crate that you fill with songs you want to mix. Each song is divided into four tracks. Usually, these are the rhythm, vocals, bass and the harmony section (which, depending on the song, can be keyboards, horns, or similar). The basic gameplay loop is to place tracks from your hits into four turntable slots and you get a remix containing four songs at the same time. The game matches BPM, pitch and everything else for you auto-magically, and mixing any of the 100+ songs is seamless and always sounds in synch.

That, in itself, is a small technological wonder. You can have Lizzo’s vocals over beats from a 70s rock band combined with a heavy metal riff and some Latino horn sections, and it all sounds perfect. All you have to do is press four buttons on your controller. 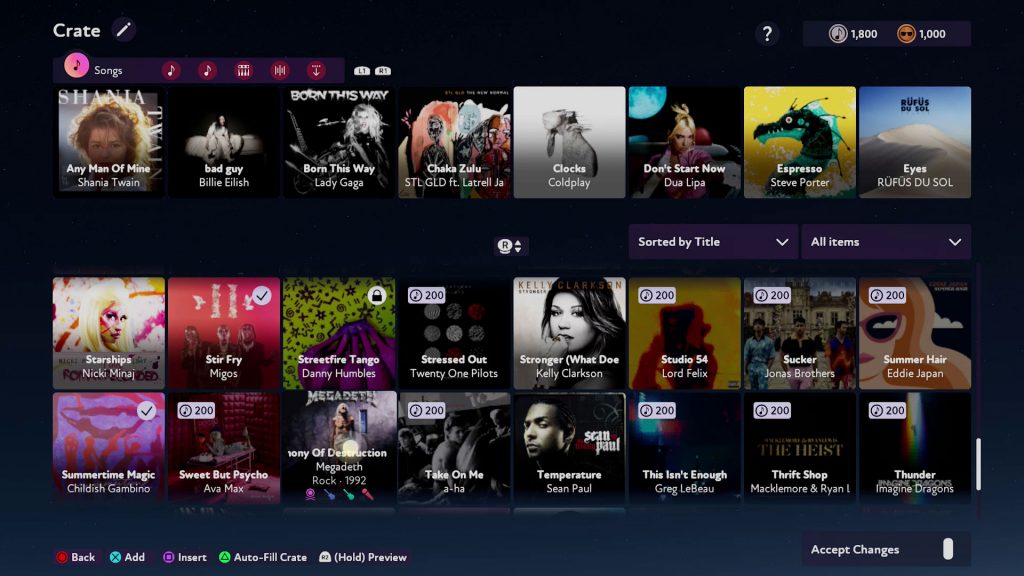 You might think to yourself: This is easy! Look, Ma! I pressed some buttons and made a new smash hit. It might seem that the life of a music producer today is easy at first. They do everything with a few presses of a button. As you play through FUSER’s campaign mode, you will quickly realize that it ain’t so. Things start to get real complicated, real fast.

As you progress though the campaign, whose real goal is to teach you about all the mechanics at first and test what you’ve learned later, you will be introduced to more and more complicated moves. Within a few hours, you will be sweating like crazy trying to drop a new disc into the mix at exactly the right time to get approval from the crowd, which will net you a better score in the end. At first, you have to learn how to drop a new disc on a downbeat. Then you are introduced to each song being divided into bars made up of four beats. Each song has a beat during which you can include it into the mix and it sounding seamless. Dropping new discs into the mix can be done on the downbeat or at a 1/4 beat; that’s how you get a good score. 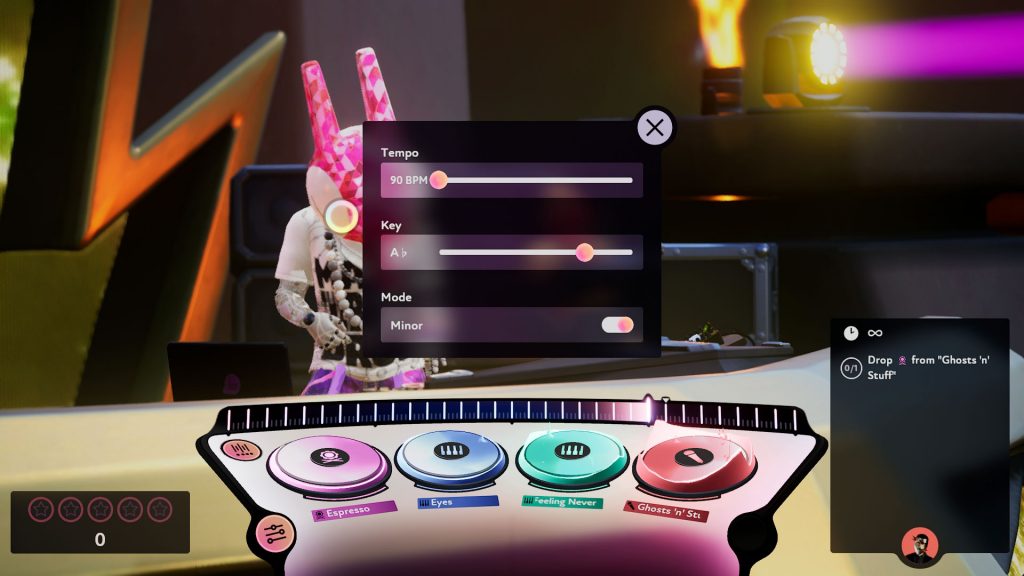 But there is more. You can mute a disc and bring it back in at just the right time to hype up the crowd. Why mix a rhythm, vocals and instruments from 4 different songs? Mix in four beats from four different songs and see what happens. Wait, you might want to slow down that BPM. You want the crowd to be hyper-energetic? Speed up that tempo then. You can change the key of the track, change it from minor to major, and even add flanger or stutter effects to one or all of the tracks.

Add to that the fact that during a single performance you will constantly get requests from the crowd to use a particular song they like and tasks that the game gives you each 20 seconds or so, and soon you will be deep in the weeds. Your performance consists of constantly trying to drop a cool disc at the correct time, muting, switching, changing tempo and trying to please everyone. It is a hectic exercise of trying to match the moving dots on the screen, timing your button presses and all the while trying to create something that sounds just right. 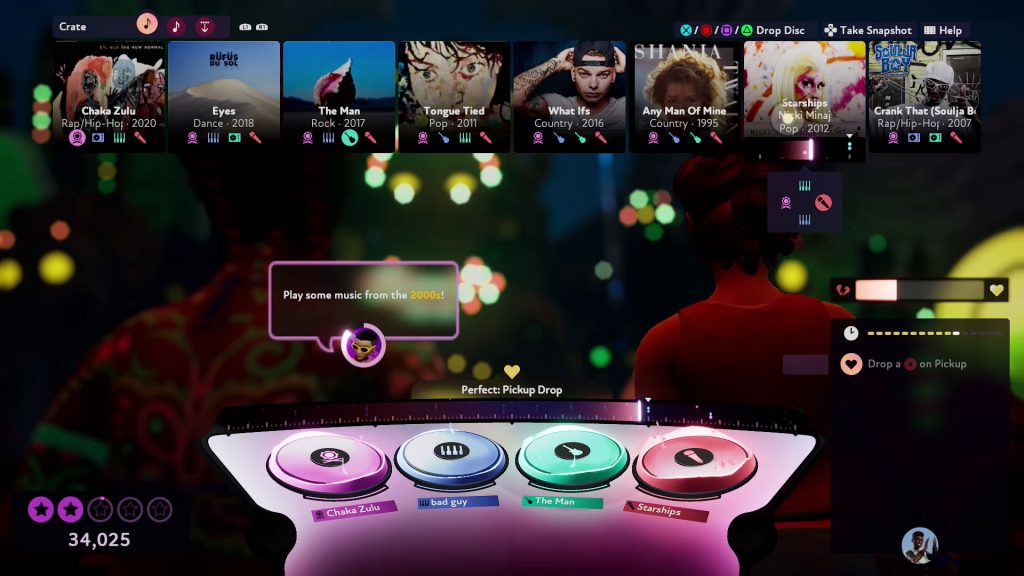 The true hero of FUSER is its gameplay. It will be familiar to anyone who’s ever played games like these. Press the buttons on the controller at exactly the right time to get a high score; a concept so simple at first that it seems stupid. The trick is that if you really want to get those 5 stars and high scores, you will have to practice for months. The gameplay is easy to pick up but very hard to master.

Playing through the campaign is not the only thing you can do in FUSER. Once you feel comfortable enough, you will have the option of multiplayer, where you’ll duke it out against another person online. The true test always lays in facing that one player that’s spent months learning each of the songs in his crate, practicing his reflexes so that each disc drop is perfectly timed, always seeking to devastate noobs. If PvP is not your thing, you can still participate in weekly challenges, where you submit your mix to the community . Here, real time performance matters little and creating good music is everything. To make you stand out of the crowd, you have hundreds of character customization options, including designing your stage and visual effects. 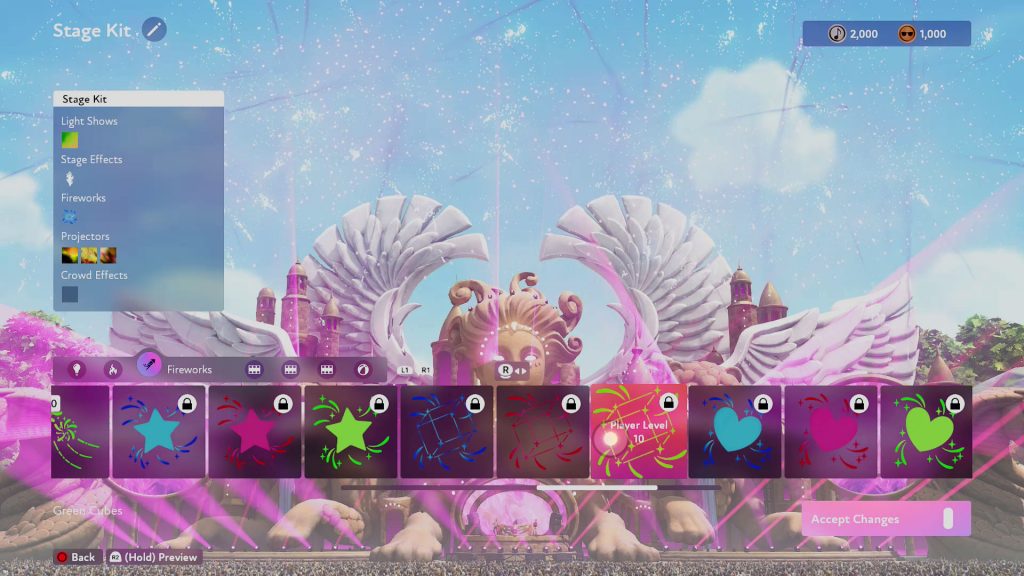 In the end, playing FUSER can be rewarding in two ways. You can choose to hone your reflexes to perfection and get the highest scores possible in all of the songs, making you the ultimate master of the rhythm video game genre. On the other hand, you can forgo score-chasing entirely and just enjoy creating cool-sounding music. FUSER has a freestyle mode where you just mix different songs to your liking and can spend hours just searching for something that excites you.

The true magic of FUSER is in the creation of new music while playing the game. During most performances, I had that magic moment where the mix I made was so beautiful to me that I would get goosebumps. As a gamer, you will probably be frustrated by how hard the game can get, and the fact that you can’t be the best without hundreds of hours of practice. My advice is that you let it go. Don’t worry about the score. Create new music. Enjoy the sound. The way things are right now, being able to hold a concert in your own home with the family gathered around and cheering you on is almost a cathartic experience.

Review platform: PS4
Game code was provided by the publisher for review purposes
(read our Review Policy for clarification)